The morning of Tuesday, December 3rd 1907, showed all the promise of another stunning Sydney day.

Summer had well and truly arrived, and with the mercury set to hit 89.8 F (32 degrees Celsius), 45-year-old Johanna Camp’s thoughts turned to a day of battling Christmas crowds in the city.

Over tea and toast in the tiny kitchen of her Parraween St home, Johanna ran through her shopping plans for the day, telling her husband she would meet up with a friend in the afternoon, before catching the Mosman ferry back from Circular Quay. 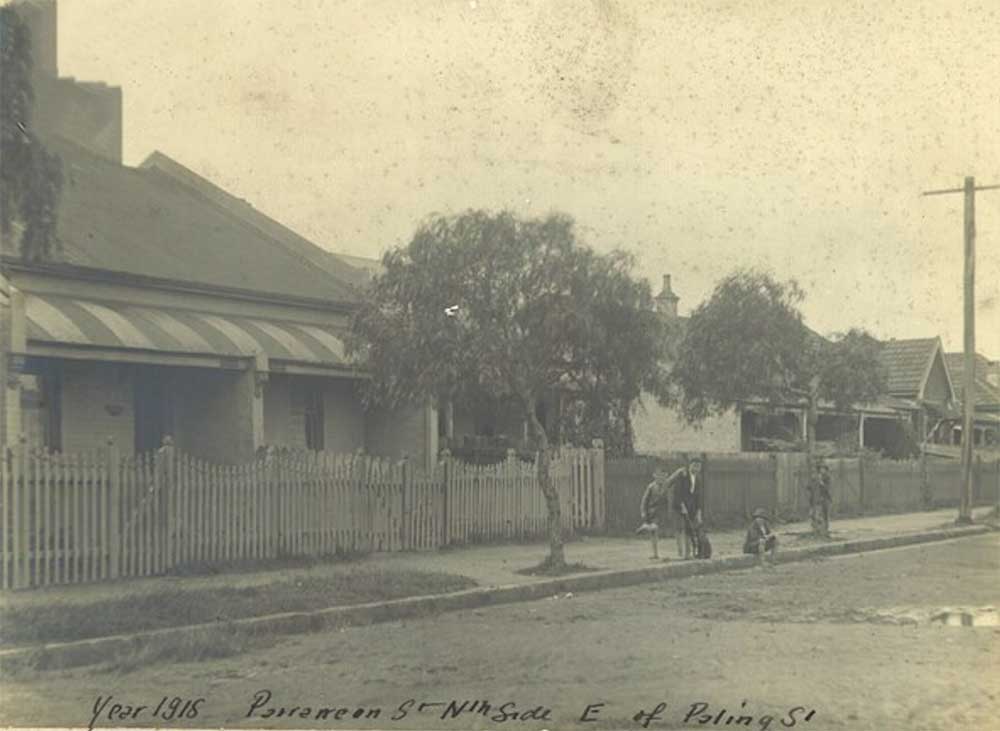 At 11 am Johanna left home; almost the same time 18-year-old Walter Stevens was returning to his, less than a kilometre away on Ourimbah Rd.

A local dairy carter, Walter and his best mate Thomas Lang had wrapped up another early morning shift delivering milk to Mosman households. Both athletic and hardworking, the pair were well known in the community and looking forward to celebrating the festive season. 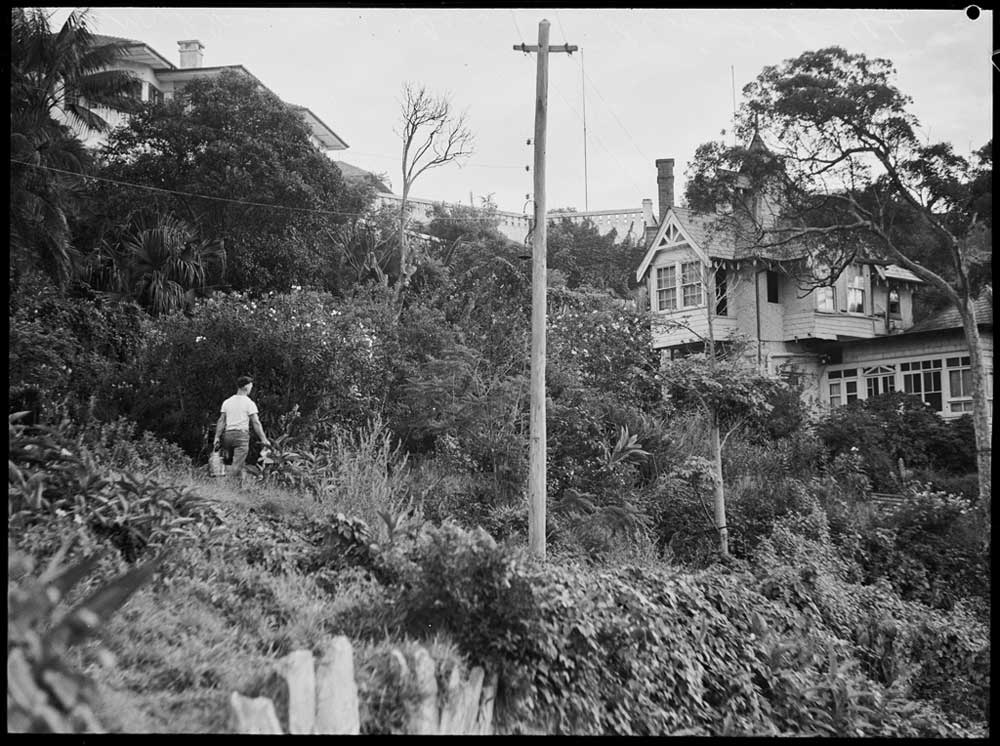 Mosman milko’s in the 1900s were known for their athleticism due to our local terrain.

Within hours worlds would collide, forever changing the paths of two testosterone-charged teenage boys, three of their mates – and an innocent married woman.

“This is one of the worst cases of its kind I think I have ever heard of,” Judge Francis Rogers would later say. 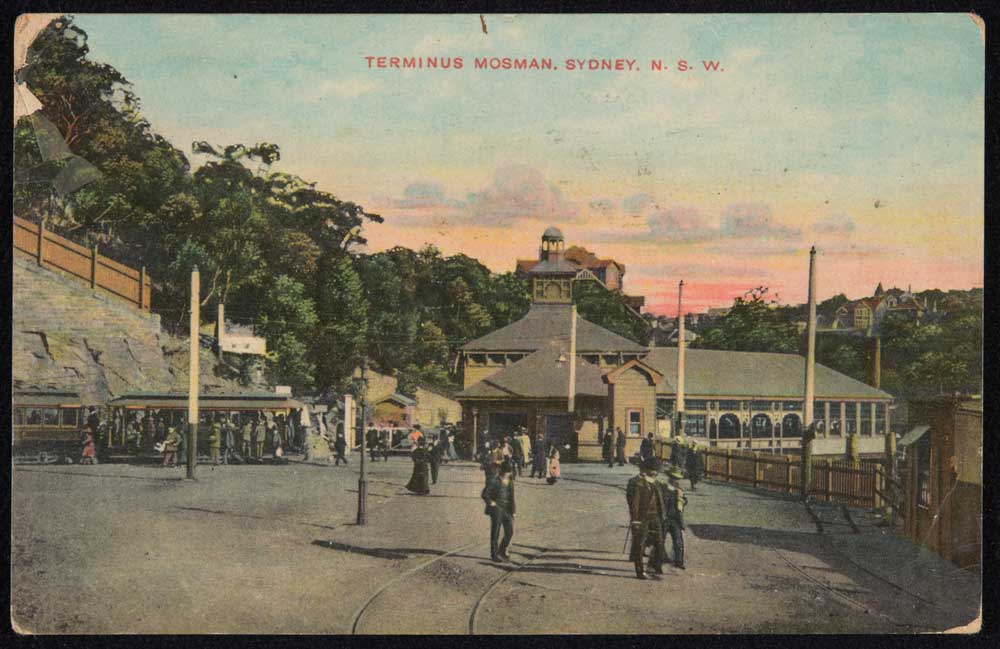 Mosman Bay had a tram stop in the early 1900s to take to Spit Junction.

It’s unknown whether the extreme heat on that day led Johanna Camp to drink, but when the tram taking her from Mosman Wharf to Military Rd stopped at Stansell’s Hotel in Spit Junction, she alighted.

It was still daylight.

Resident Martha Butler would later tell police she saw Mrs Camp surrounded by several youths on Military Rd around 9 pm. Another woman, Jane Hayes, described seeing a drunk woman with a group of boys at Spit Junction at the same time. 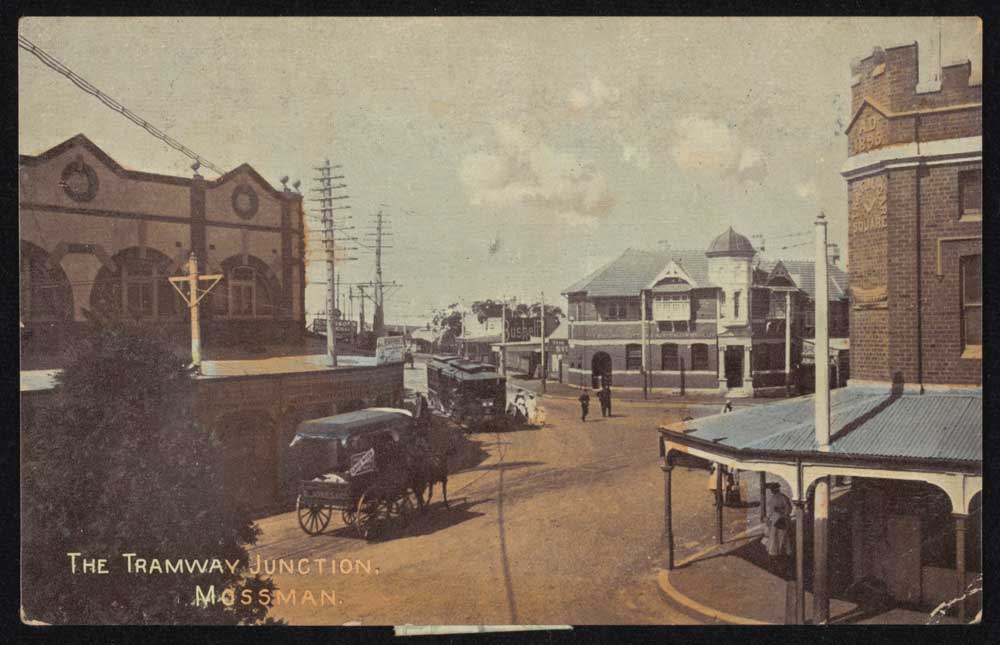 Both women told the teenagers to leave Johanna Camp alone.

“The boy’s Stevens and Lang were there,” Mrs Butler testified in Court, “and Stevens was one of the first to take hold of the woman, whom they eventually carried away down Cowles Rd.” 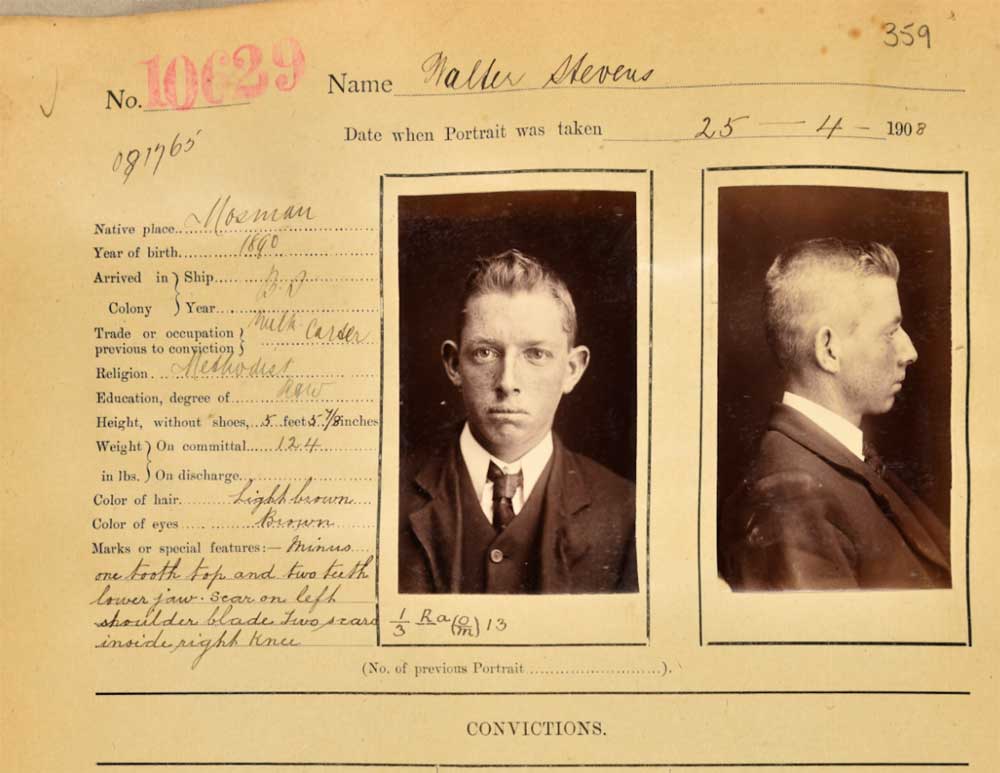 Mrs Camp, confused and drunk, was taken to a vacant block of land next to St Luke’s Church, her terrified screams alerting Mosman police officers Senior Sergeant Gumley and Constable Martin, who were close by on Belmont Rd.

“Approaching the fence, I heard a woman say, “Where am I? Where have you brought me?” Constable Martin told the Court.

“A male voice replied, “You are in Parraween St. Don’t you see Waines Butchers over there?” The woman replied, “How dare you insult a lady?” A male voice said, “It’s alright, Mrs.” 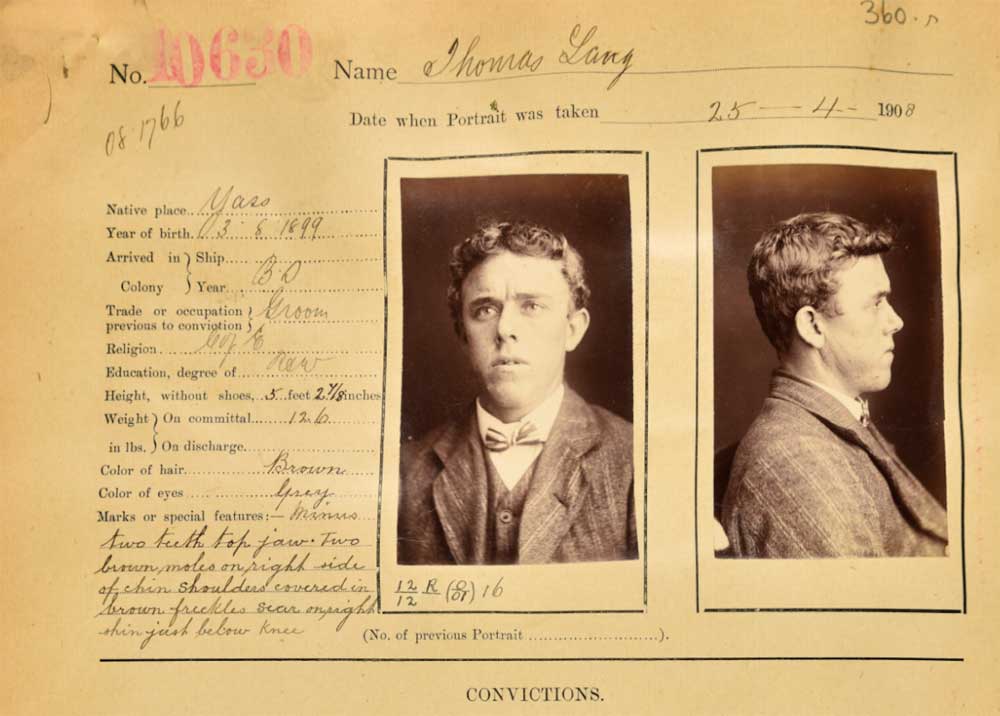 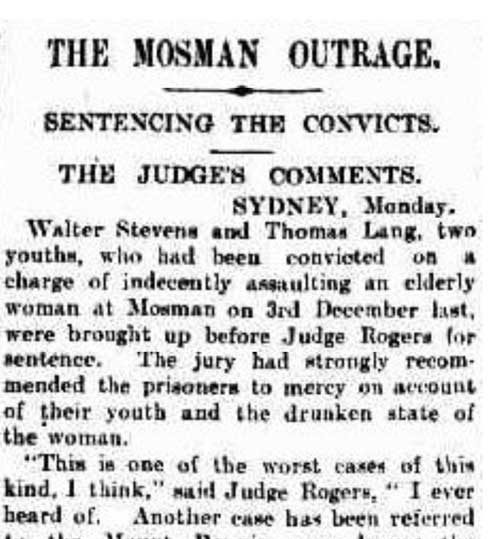 “This is one of the worst cases of its kind,” said Judge Rogers. 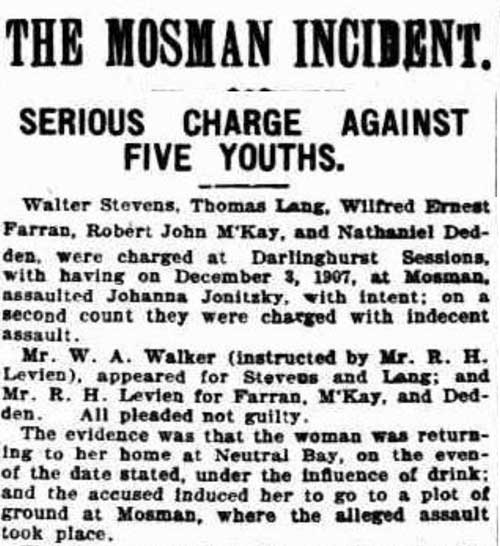 Charged with assault and intent to commit a serious offence, the teens faced Trial in April the following year, with the story making headlines around the country.

On 5 May 1908, the Jury brought in a verdict to acquit Farran, McKay and Dedden and convict Stevens and Lang, with a strong recommendation to mercy, on the grounds of their youth and the drunken state of the woman.

In sentencing, Judge Rogers reflected on the Jury’s recommendation when making his decision “with a great deal of pain”.

“An old woman was going to her home in a drunken – almost helpless – condition. The prisoners and others came along and were speaking to her about taking her home,” he said.

“Two respectable women asked them to go away, for it was a job for the police. But they did not take that advice. 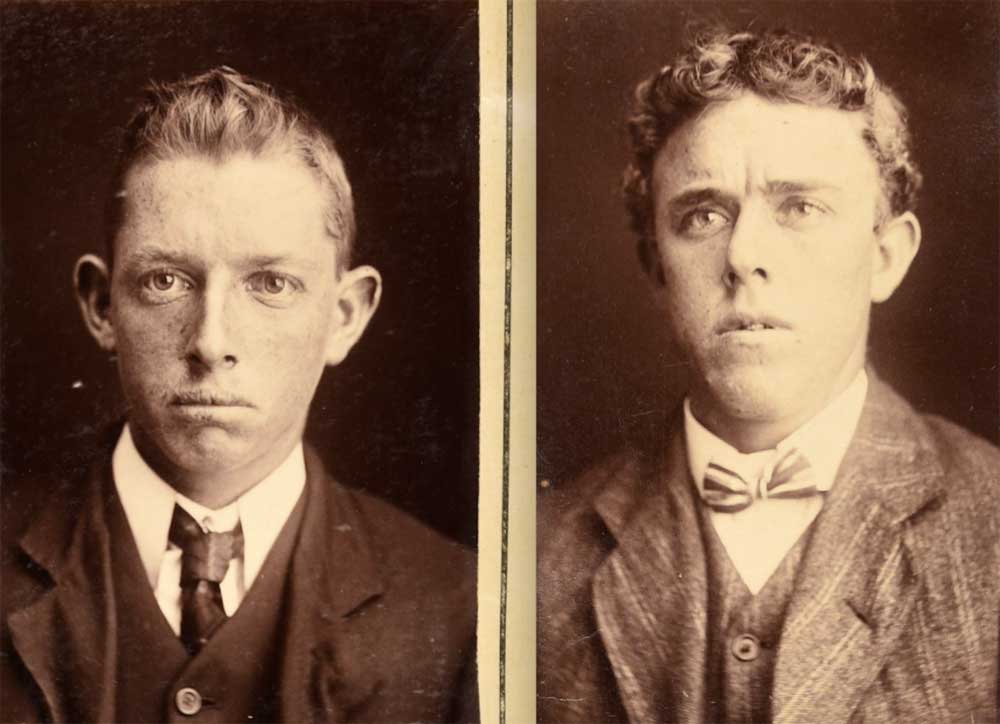 Walter Stevens and Thomas Lang were sentenced to two years of hard labour at Goulburn Gaol.

“Instead of taking the woman in the direction of her own home, the youths took her to a piece of land situated at right angles to where her home was, and then she was ill-treated violently.

“I think,” his Honor continued, “this is one of the worst cases of its kind I have ever heard of. Another case has been referred to (the Mount Rennie case*), in which a number of youths lost their lives by going a little further than you did.” 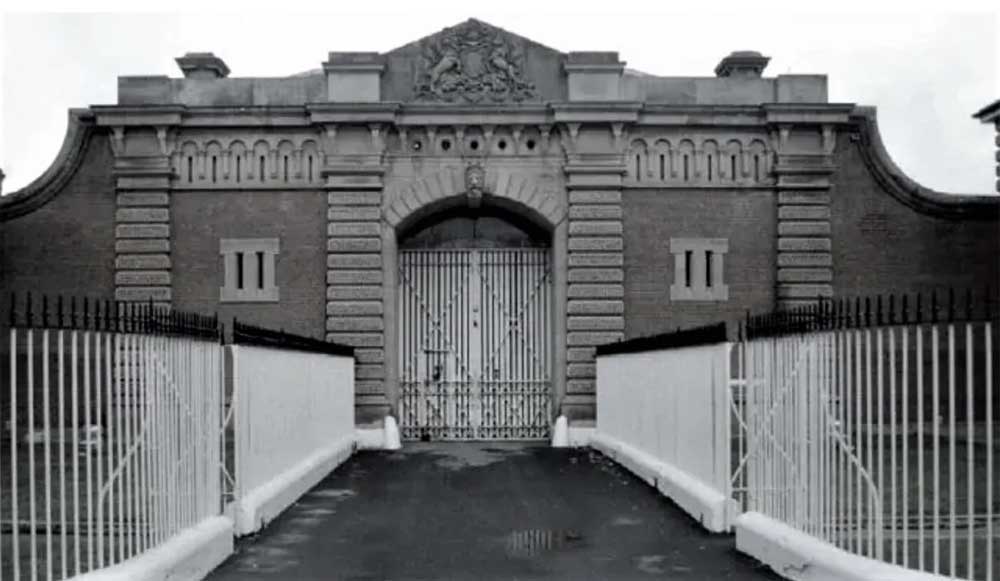 Footnote: The Mount Rennie rape case is the only gang rape in Sydney, Australia, during the 1880s that led to a full conviction of the participants involved in the crime – young larrikins of the “Waterloo Push”. The attack is sometimes referred to as the “Mount Rennie Outrage” or the “Waterloo Outrage”.

Justice Windeyer declared the crime as a “most atrocious crime, a crime so horrible that every lover of his country must feel that it is a disgrace to our civilization”.

The first nine men were convicted and sentenced to death; the last two were acquitted. All but one were reportedly under 20 years of age.