TRENDING NOW >
Food News: Three Michelin starred restaurant L’Enclume to take up five-week residency at Bathers Pavilion.
Local outrage: Fifty-year-old ornamental palm tree to be destroyed for new Milsons Point cycleway ramp.
Exclusive: Twilight at Taronga returns in 2023 with James Morrison’s “A-Z of Jazz”.
Ryan Gosling to shut down Sydney Harbour Bridge while filming “The Fall Guy” this weekend.
Lower north shore residents reminded Lifeline services available during the Christmas break.
Home » STIR UP SUNDAY: What is it – and why is it celebrated?
Previous Next

STIR UP SUNDAY: What is it – and why is it celebrated?

This year, Stir up Sunday falls on Sunday November 21.

The long-established baking tradition called “Stir up Sunday” falls this weekend. It’s the day when wishes are said to come true, so grab the wooden spoon and get mixing!

The last Sunday before Advent is “Stir up Sunday”, a time-honoured family ritual for many, who gather to prepare the Christmas pudding. This year, it falls on November 21.

Advent begins four Sundays before Santa’s arrival, and the tradition of “Stir-up Sunday” is fascinating, even if you’re not religious.

A Christmas pudding should have 13 ingredients – to represent Jesus and the 12 disciples.

What is Stir-up Sunday?

The pudding is stirred (while making a wish) by each member of the family from East to West, to remember the Wise Men who visited Jesus in the Nativity story.

The customary garnish of holly represents the crown of thorns.

Adding coins and charms to the pudding is said to bring you luck if you find them on Christmas Day. In old times, the lucky charms were a silver coin for wealth, a wishbone for luck, a thimble for thrift, a ring for marriage, and an anchor for safe harbour.

Where does Christmas Pudding come from?

The Christmas pudding originated in the 14th Century as porridge type concoction, originally known as “frumenty”, which bears little resemblance to the dessert we know today.

Originally, it was made with hulled wheat, boiled in milk, seasoned with cinnamon and coloured with saffron. It was associated with meatless days, lent and advent and was often served as a plain dish. But there are a variety of recipes which included additions such as beef, mutton, raisins, currants, prunes, wines and spices.

In the 17th-century changes to the recipe were made. It was thickened with eggs, breadcrumbs, dried fruit and beer or spirits were added – and came to resemble something a bit more like a sweet pudding. However, it was the Victorians who fine-tuned the recipe into the Christmas pudding many of us enjoy today. 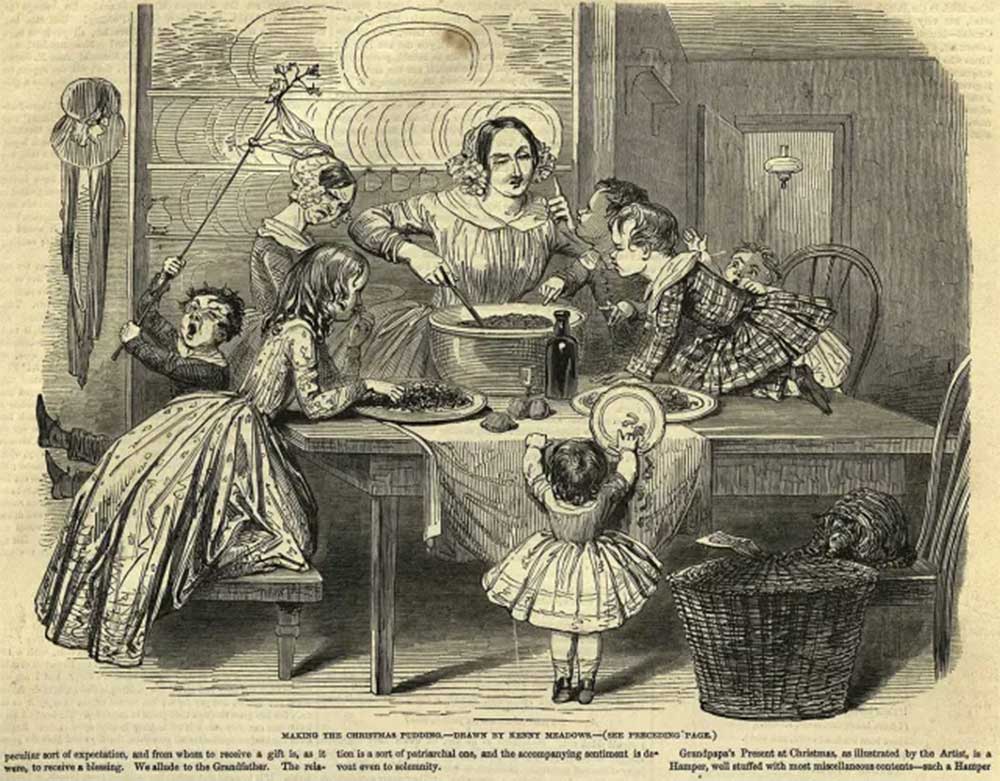 Christmas pudding dates originated in the 14th Century, but became the sweet version we know today in the Victorian era.