TRENDING NOW >
Socceroo’s News: Where to watch Australia play Argentina on the lower north shore this Sunday.
“If you can drive a car, you can drive a tractor”. School leavers urged to take up farm work in rural NSW.
Bridgepoint Mosman embraces Christmas with Nativity Scene, Santa photos and festive gift wrapping!
“Get in quick”: Local Christmas tree shortage impacting Mosman, Cremorne and Neutral Bay.
Grab the best vantage spots and ring in the New Year at family-friendly harbourside locations.
Home » Profile: With $1.3 Billion in sales, prestige agent Michael Coombs reveals the man behind the Rockstar image.
Previous Next

Profile: With $1.3 Billion in sales, prestige agent Michael Coombs reveals the man behind the Rockstar image.

When it comes to the high stakes game of prestige real estate, they don’t come much bigger than Michael Coombs.

Tall and lean with a dazzling, mega-watt smile, the immaculately groomed 41-year-old is a dominant force on Sydney’s lower north shore, with an eye-watering $1.3 billion in sales chalked up over the past decade.

And, in an industry where name recognition is everything, the Coombs brand is considered real-estate gold. “The best of the best,” is how tech giant James Spenceley, describes him. 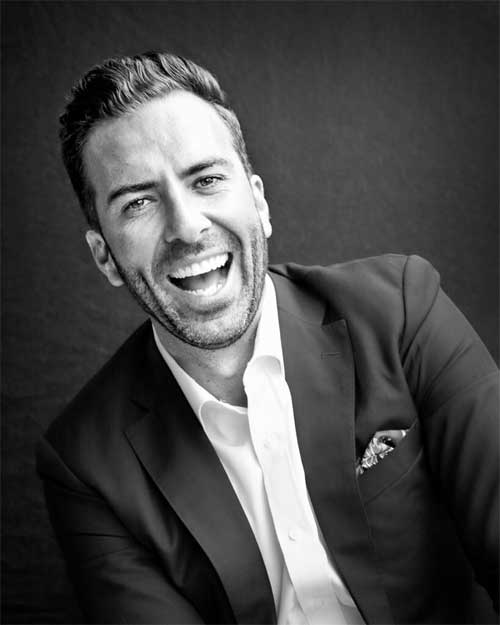 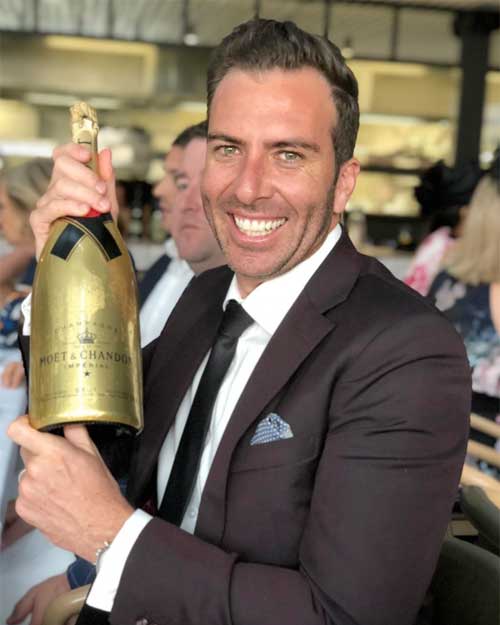 Michael Coombs: The man with the Midas touch!

Coombs is nothing short of a real estate Rockstar, responsible for more than 40% of all sales on the lower north shore. With a client list of wealthy and powerful identities, he moves the most expensive mansions on Sydney Harbour, reaping a rich return in the process.

“Michael is just bloody good at his job,” Spenceley tells me, “He’s a straight talker and a ruthless deal maker who has a sixth sense when it comes to the prestige property market.” 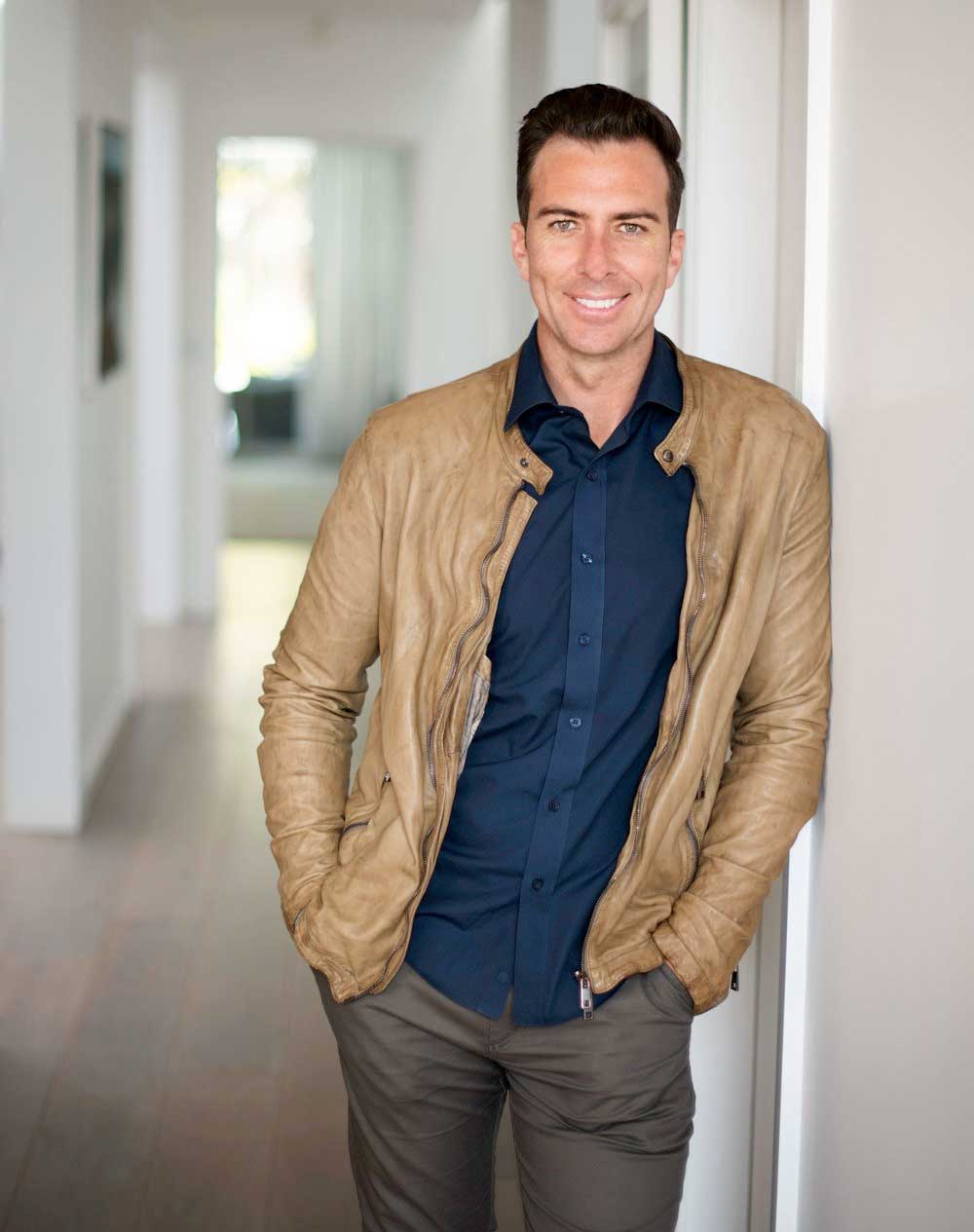 Standing just over 6 feet, you can feel the Coombs charisma from the moment he enters the boardroom of his luxury Military Rd offices. Confident but not self-centred, he has a disarming relatability, and a habit of machine-gunning his way through conversation at blitzkrieg pace.

“I was once told that I talked so fast I could get a job as a livestock auctioneer – or a race caller,” Coombs says, erupting into a cackle of laughter, “but Royal Randwick wouldn’t have known what the hell was going on, if they put me behind a microphone.” 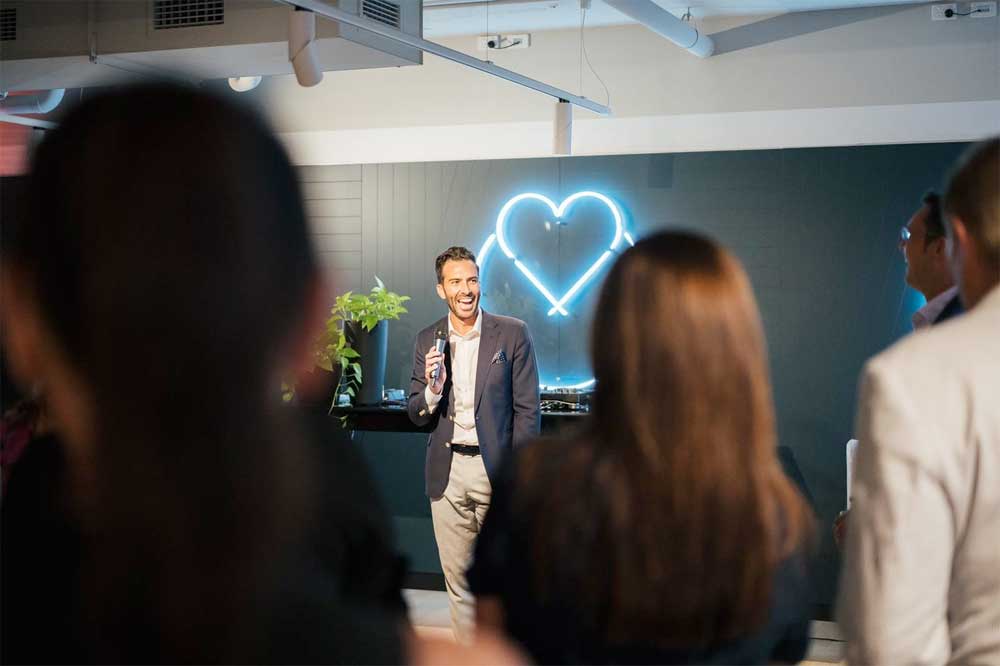 Coombs is said to have a smile as big as Luna Park, that can light up any room.

These days, the opulent Mosman mansions Coombs sells, are a world away from where he grew up: a rented, two-bedroom flat in Dee Why, with mother Debbie and three sisters. Born at Manly Hospital in 1978, he tells me there was never much money, “but always a lot of love.”

“My mum had two jobs just to keep food on the table,” Coombs says, “she left home at three o’clock every morning to help out at the local bakery, and then at nine o’clock started her job as a receptionist.”

But any suggestion of his family living on ‘struggle street’ is quickly dismissed, with Coombs instead describing a carefree childhood, filled to the brim with “good times and great memories”.

This sunny disposition, Debbie Coombs says, is something her son was born with: “A rare attribute that has paved the way for Michael’s professional success,” she tells me, “and he can turn any negative situation into a positive one, both in life and business.”

The close bond shared with his mother, forged over years of financial hardship, has clearly shaped Coombs into the man he is today.

With boundless optimism and natural curiosity, it seems Michael Coombs has always made a habit of diving in at the deep end, even while delivering newspapers as a child. 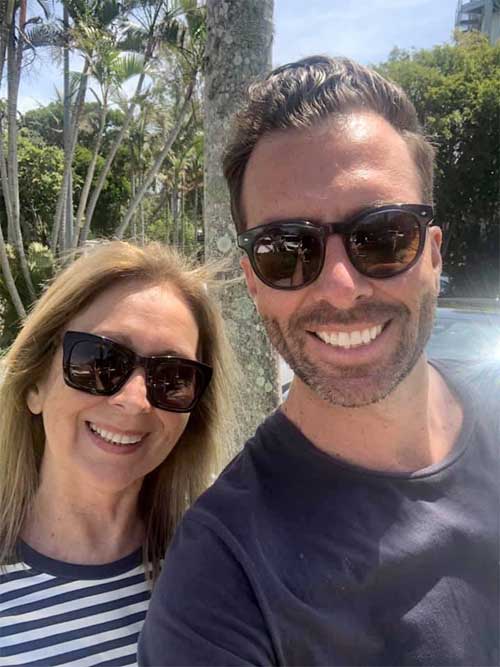 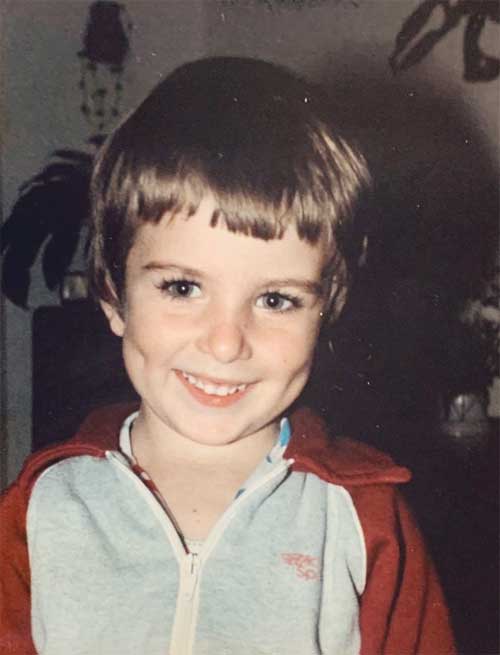 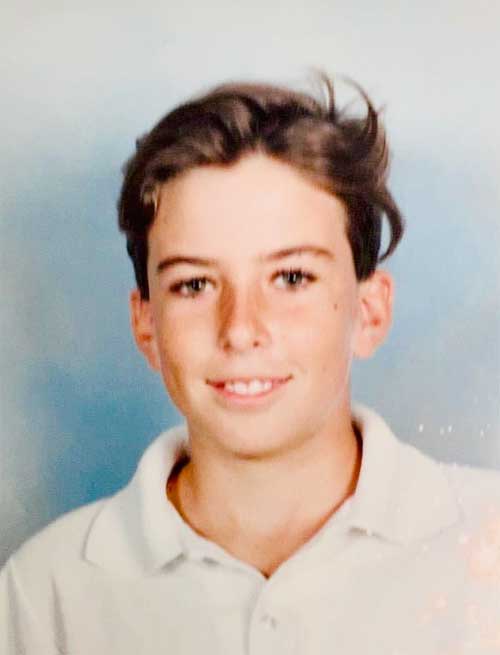 “He had only just started riding a bike, Debbie says, “and the next minute Michael was begging me to do the Dee Why paper run at 4am every Sunday morning – at the age of just eight.”

The paper run was the first in a long line of part time jobs that Coombs juggled during his early years. From packing boxes at a juice factory, to cleaning meat trays at the local butcher, he tells me he was always an enthusiastic worker, with a dream of making enough money to purchase a home for his mother and siblings. 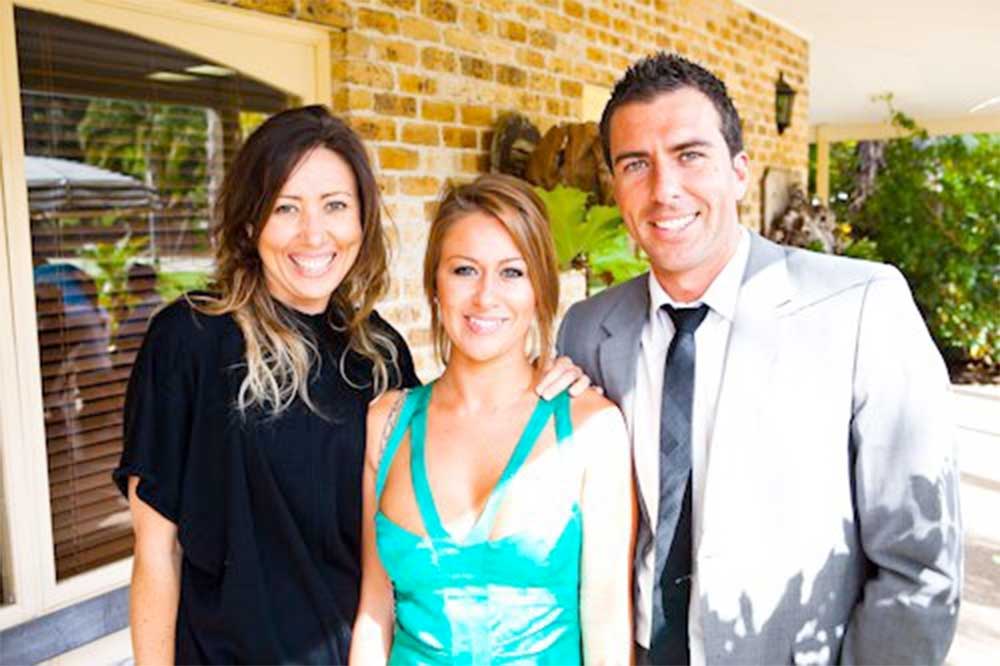 A younger Coombs, pictured here with two of his sisters.

“I guess I was fascinated by other people’s houses because we didn’t have one of our own,” Coombs admits, saying that even as a 14-year-old, he’d scour the newspaper to look at real estate listings.

“On the weekends, I’d turn up to open houses, where agents sometimes kicked me out thinking I was going to steal the TV or DVD player”, he laughs.

By the time he was in Year 11 at Cromer High, Coombs says the idea of selling houses had become a full-blown passion. 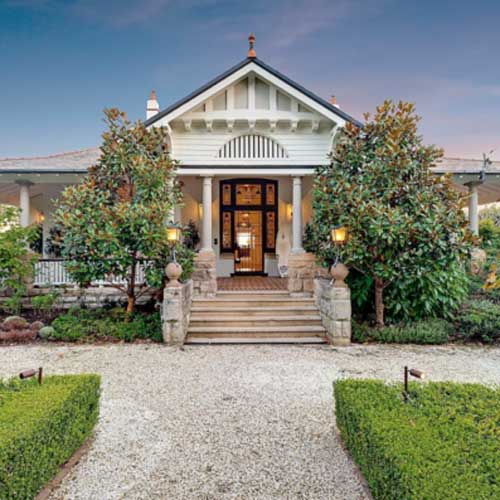 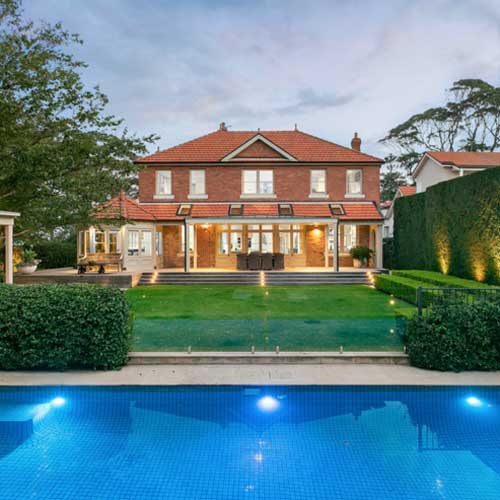 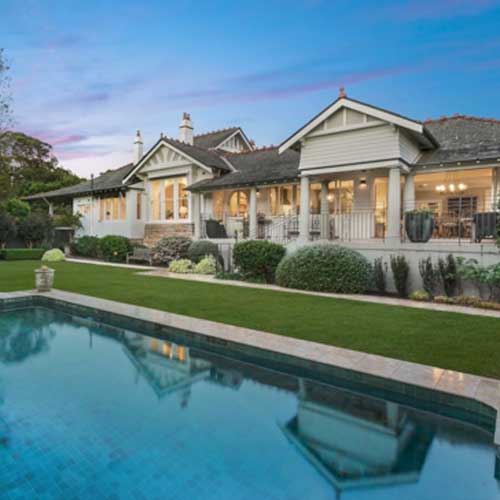 Making the strategic decision to forfeit the HSC, he left school to begin a landscape gardening apprenticeship, while studying for his Real Estate Certificate at TAFE.

“My goal was always to have my own business, and looking back it was an overly ambitious plan, because I started with absolutely nothing.

“But I just rolled up my sleeves, did the hard yards – and never thought about throwing in the towel.”

It’s this pioneering spirit, combined with unbridled enthusiasm and pure self-belief, that set Coombs firmly on the road to a glittering, multi-million-dollar career.

He lists veteran Mosman agents David Howe and Sandie Dunne as early mentors, who took him on as an assistant in 2002.

“I eventually went out on my own, starting the Michael Coombs brand in 2007 – and then rode through the GFC storm,” he says. “There were many who thought I wouldn’t see the year out, but I just kept plugging away.” 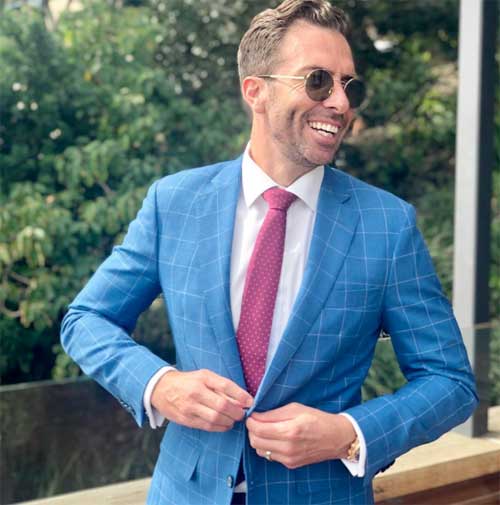 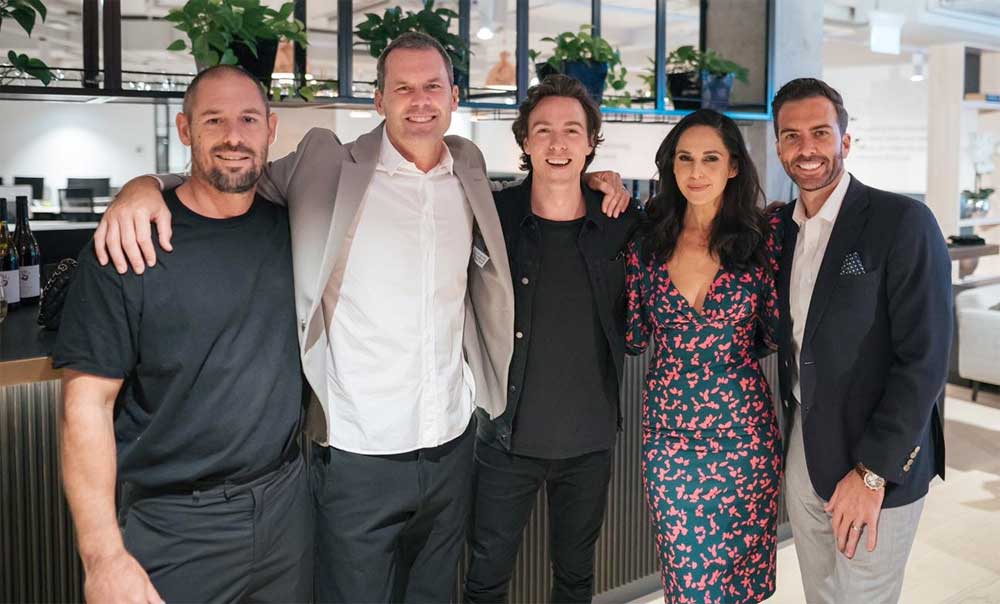 Agent to the Stars: Coombs and his famous mates at recent Avnu launch party.

As Coombs tells it, his first sale was a rundown studio apartment in North Sydney, that had languished on the market for months. “It was basically unsellable,” he laughs, “Two people eventually showed up and I reckon I borderline harassed them until they bought it.”

With $4000 commission in his pocket and an insatiable hunger to win another listing, the rise – and rise – of Michael Coombs began in earnest.

“From that first sale of $248,000, it happened pretty quickly,” he tells me, “because I put in more hours, knocked on more doors, and made more phone calls than the next bloke.”

After 18 years in the property game, Coombs is now ranked as one of the country’s top billing agents, with statistics that speak for themselves: 1,600 total sales, with a median price of $6.7m and a 92% average clearance rate.

“Those big sales numbers are not just about me though,” he says, “there is a trusted group of people behind the Michael Coombs brand, an inner circle of family and work colleagues.”

Work aside, Coombs is just as passionate when it comes to his other great loves; wife Mia, son Boston and his charity, Father Joe Foundation. 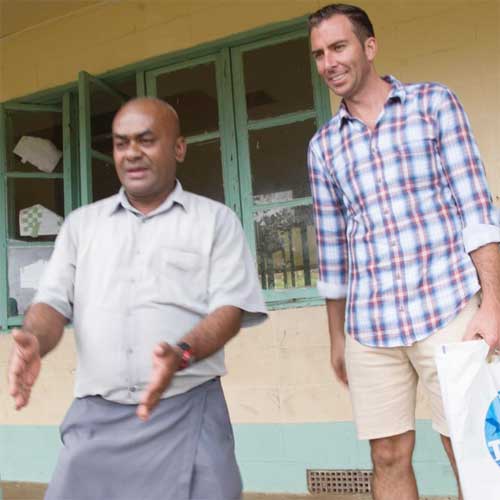 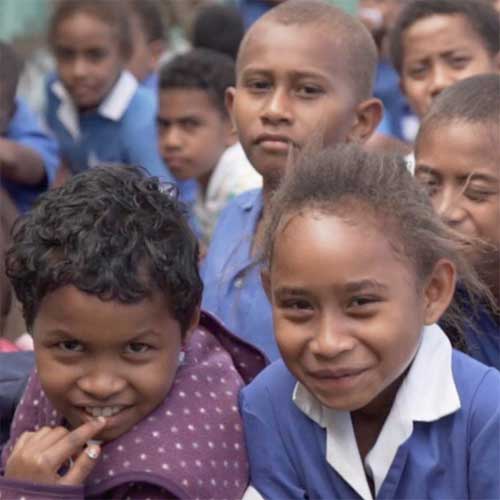 “The people of Fiji are so happy and full of life, despite having so little, so I guess in a way I could identify with that.

“And, apart from marrying Mia, it’s the best thing I’ve ever done,” he laughs. 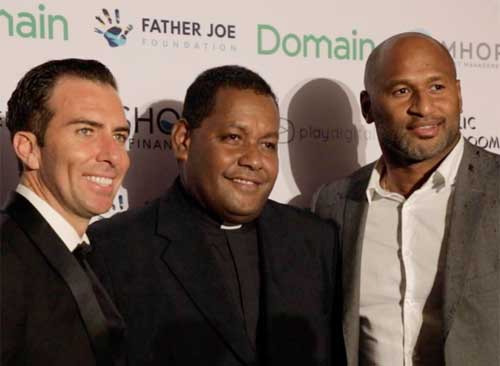 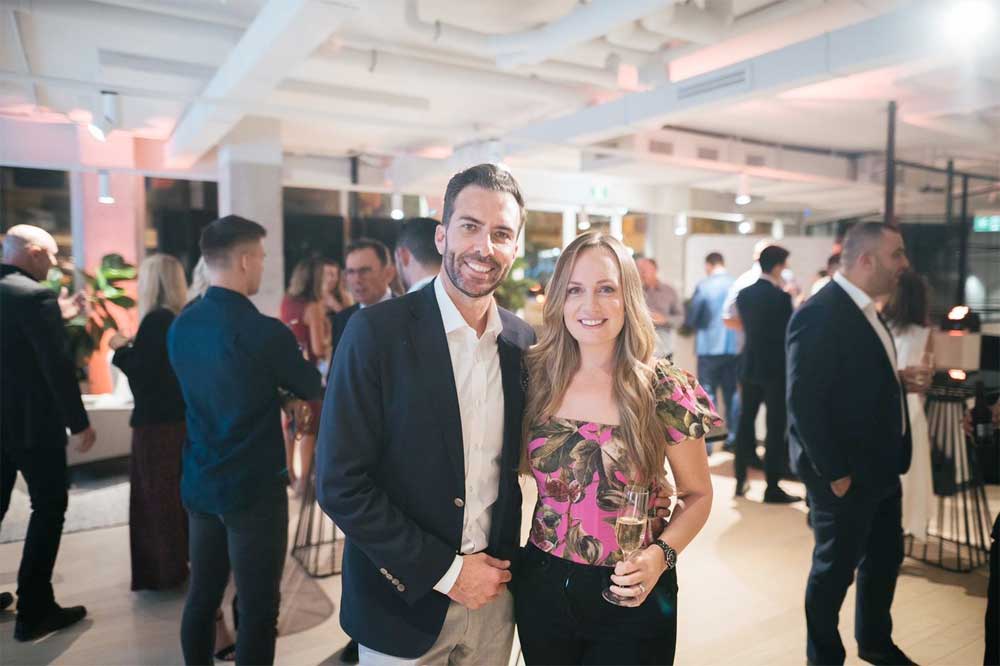 “I wanted to evolve as a real estate agent and when Janusz Hooker approached me with the business model it was a no brainer,” Coombs says.

“For agents like me, the platform offers ground breaking efficiency, automating the hundreds of steps involved from appraisal to settlement.”

Chasing an ambitious target of $500m in sales over the next 18 months, Coombs says Sydney’s real estate sector is once again “humming along”, following the recent Federal Election.

“We’ve had some champagne moments in the past few weeks, with blue chip stock back on the Mosman market,” he says.

“Money is on the table – local agents are smiling – and life is good.” 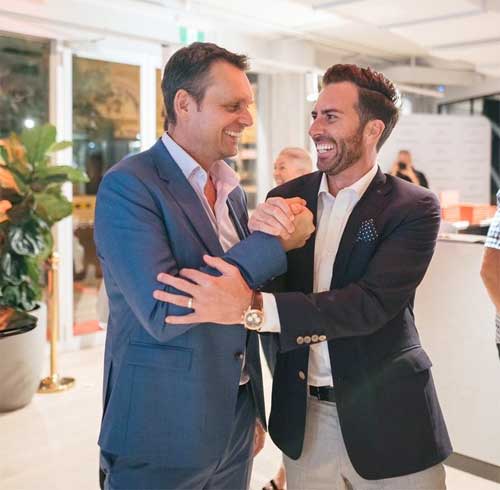