In 1916, hundreds of animals were moved across Sydney Harbour to their new home at Taronga Zoo.

Over the course of six months, an entire zoo population of native and exotic animals was moved from cramped quarters in Moore Park to an idyllic paradise known as Taronga Park. But there was one creature too large to be put in a cage. Her name was Jessie the Elephant.

It was just before dawn on a Sunday morning in September 1916, when the final stage of an audacious project dubbed “Operation Noah’s Ark” got underway.

It had taken years of logistics to work out how to relocate 228 mammals, 552 birds and 64 reptiles from Sydney’s first zoo at Moore Park, to a new open air bush setting known as Taronga Park, in 1916.

Now, there was just one more animal to move.

Her name was Jessie the Elephant. 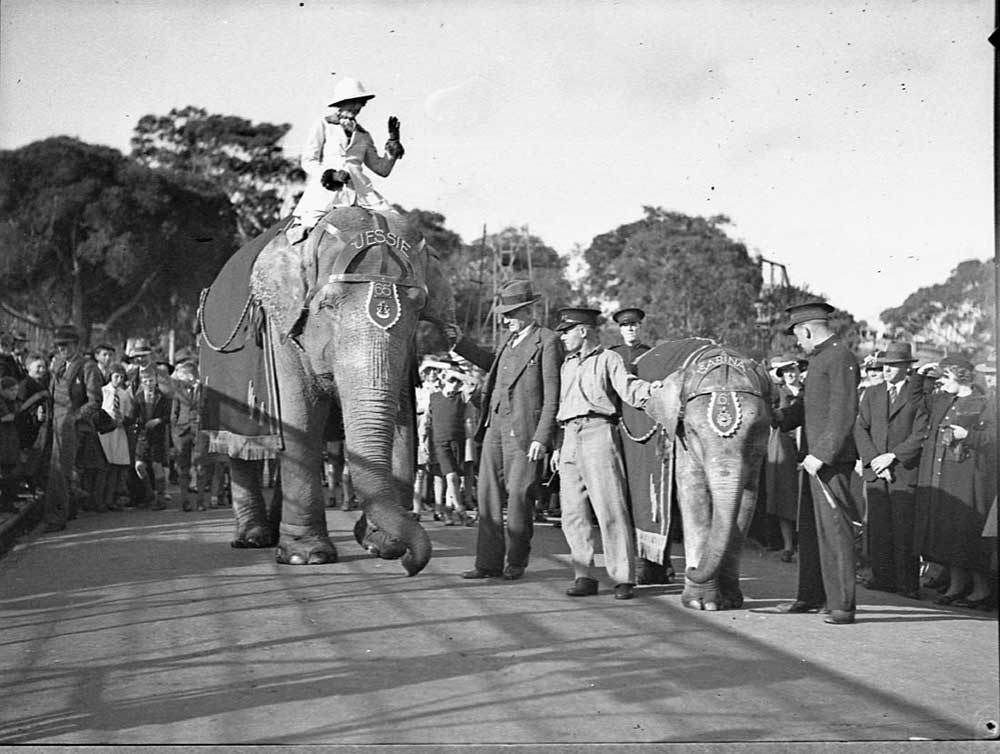 The mighty and much loved “Jessie” the Elephant. Photographed at Taronga Zoo in the 1930s.

Monkeys, seals, lions, tigers, ostriches, and crocodiles had already been crated – then moved – to their new home north of Sydney Harbour, but Jessie posed a much bigger problem for zookeepers.

“You can’t put four tonnes of elephant in a cage, the Sydney Morning Herald reported, “and if you could, you wouldn’t be able to move the cage afterwards. So, Jessie will walk. It remains to be seen how the airing will agree with her.”

At 5:00am on September 24, 1916, Jessie departed her Moore Park home of 33 years through the zoo’s front gates on Dowling St, with three elephant keepers.

A placid creature said to be adored by generations of Sydneysiders, she walked timidly down Flinders, Bourke and Palmer St, then through the Domain to Macquarie St. 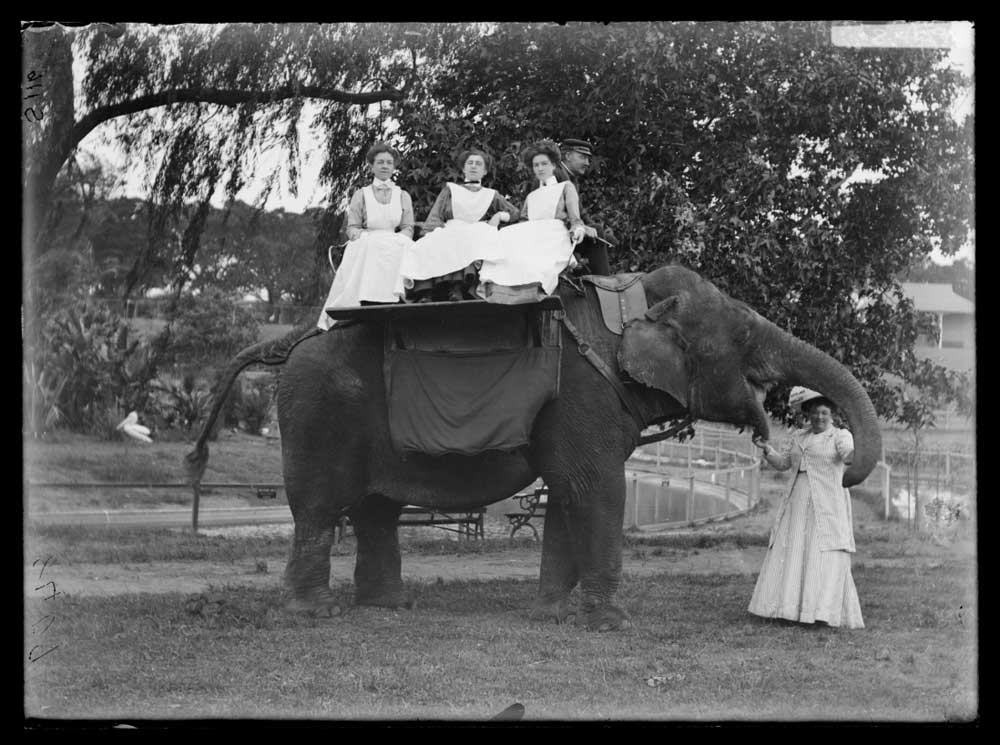 Three woman were photographed at Moore Park Zoo in the early 1900s, sitting atop Jessie.

“Unlike circus elephants, which seem accustomed to travel, Jessie has only left her home at Moore Park once since 1882,” the Evening News reported, “and while docile, the attitude she might adopt toward trams, motors, horses, tall buildings and ferry boats is all a matter of speculation. If she becomes panicky, nothing will be able to hold her.”

The elephant enclosure at Taronga Zoo.

At 6:15am, the procession reached the harbour, where a ferry steamer was waiting to take the frightened animal direct to Taronga.

An eyewitness told reporters Jessie “relied on her keepers” to ensure she was safe. 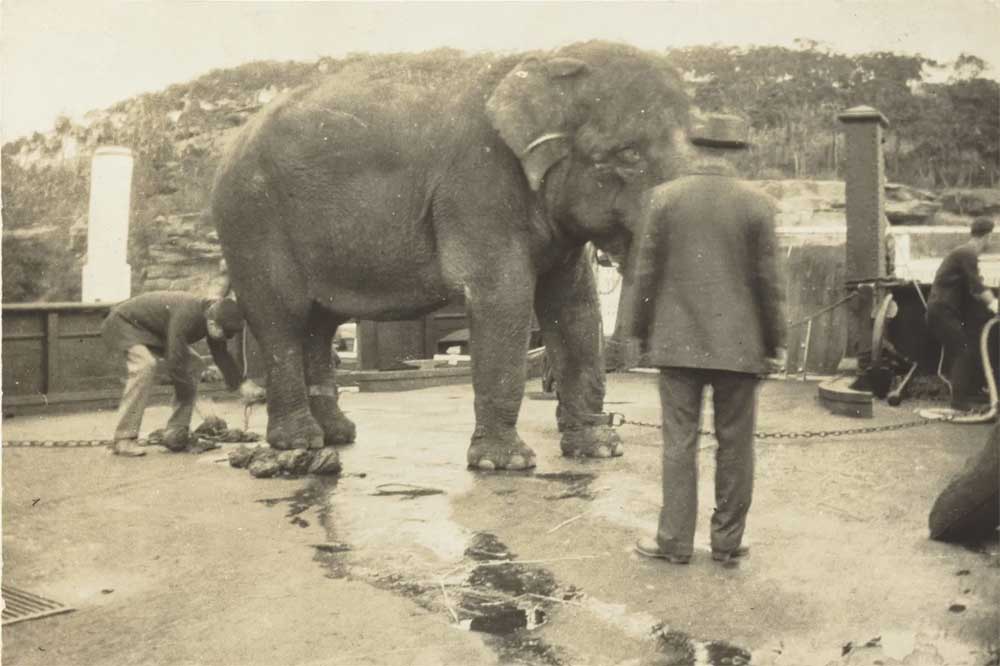 This incredible image of Jessie was taken on board the barge as she headed for her new home at Taronga on September 24, 1916.

“Now and again, when any strange object boded danger, she would feel around with her trunk to make sure the keepers were beside her,” the eyewitness said, “A pat on the shoulder or a reassuring grip on her ear and she would pass through narrow streets or over tram rails, with a nervous glance to either side and an evident determination to see the journey through if her keepers said so.” 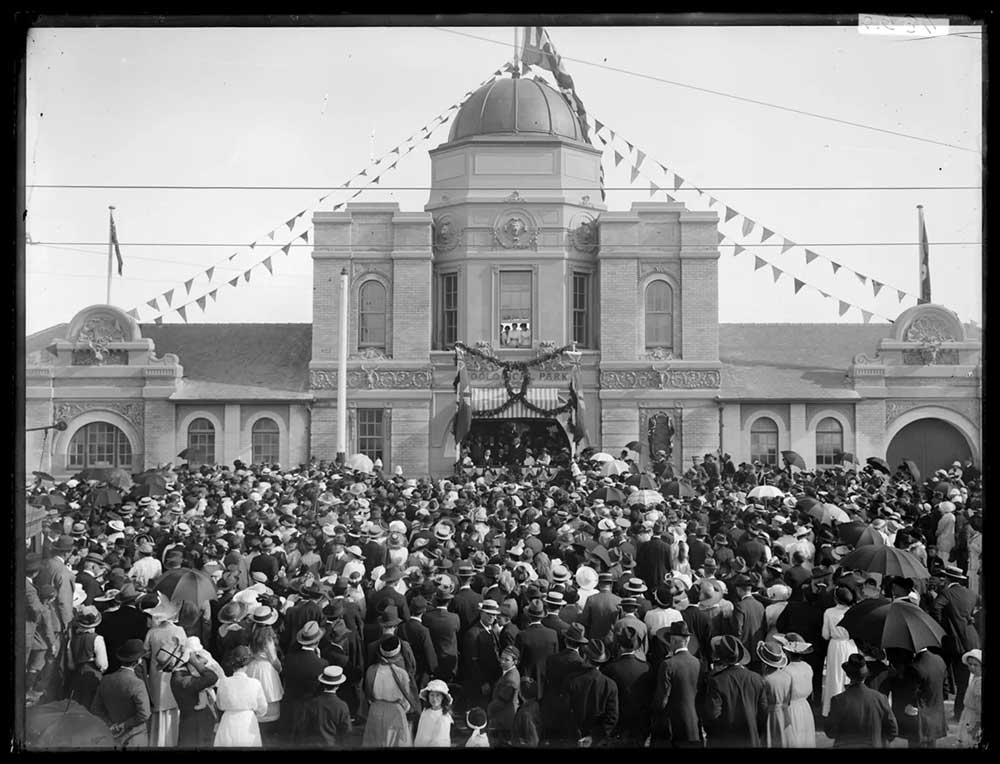 Travelling four miles (6km) in an hour, the only hiccup was Jessie’s feet becoming tender from the journey, but she made her way onto the punt with little fuss and remained “still as a rock” for the short trip to Mosman.

On arrival at the jetty, there was a moment of anxiety when the pontoon dipped into the water under the weight of “Jessie’s fairy tread.”

“She took objection to the steep ramp at the Taronga Park Wharf however, and resolutely turned her back upon it; so finding the argument useless, the attendants simply pushed her up backwards,” the Sydney Morning Herald of 25 November 1916 said.

Jessie’s arrival at the top was met by salvos of wild applause. 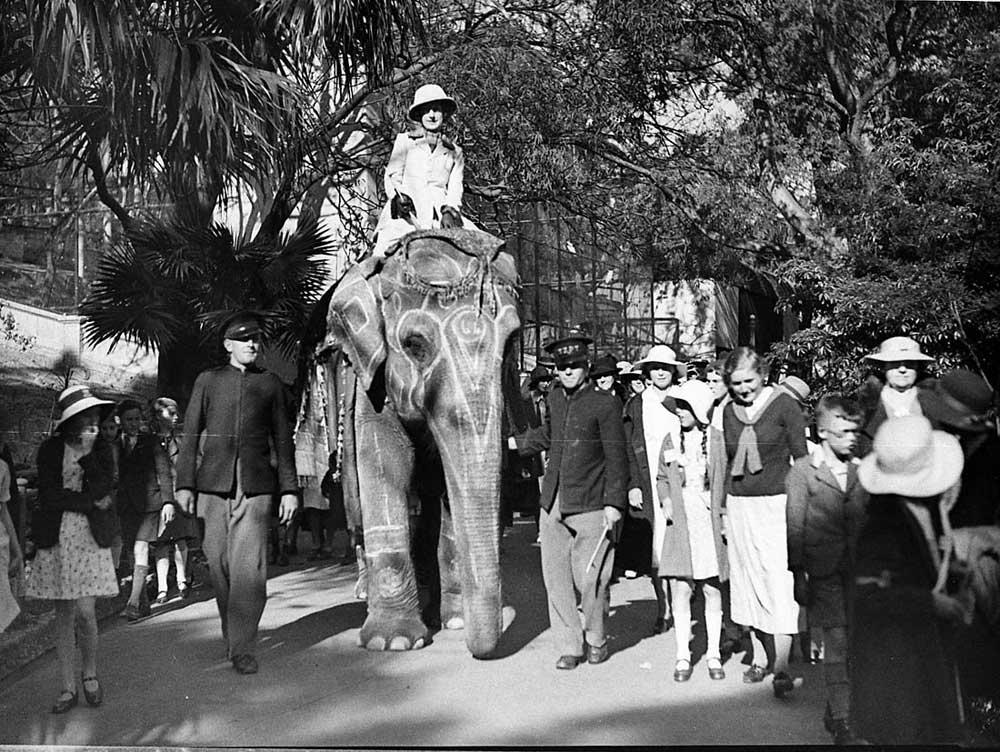 “All the cockatoos, galahs, peacocks, native companions, kookaburras and other old friends recognised Jessie and gave her such a vociferous welcome that she forgot her annoyance and marched off gaily to her quarters.”

How to Move a Zoo, a special interactive exhibition about this era in our history, opens on November 20 at the Museum of Sydney.