TRENDING NOW >
Census 2021: Here’s what we’ve learned about life on the lower north shore.
New mixed-use development to replace Mosman’s Mirror Gallery on Military Rd.
Get your 70s groove on! ‘Sydney’s Most Awesome Supergroup’ to play at The Orpheum.
Get ready to pay more. Mosman and North Sydney residents about to be slugged by Council rates hike.
Crime Watch: Succulent Chinese meal. Man goes ham – and Good Samaritans pray for Mercy.
Home » Flashback 1993: Allan Border smashes a century on the ground named after him – in front of 6000 local fans.
Previous Next

Flashback 1993: Allan Border smashes a century on the ground named after him – in front of 6000 local fans.

Mosman old boy Allan Border with the Australia One Day International team in 1986.

Mosman’s centenary was celebrated with a one-day cricket match at Mosman Oval, between a Mayor’s XI captained by Allan Border and an opposing local team led by Greg Chappell. The Mayor’s XI won by four runs – before the ground was renamed to become Allan Border Oval, as Phil Wilkins from the Sydney Morning Herald reported on 5 April, 1993.

Mosman Cricket Club’s most distinguished old boy came home yesterday, stopping off long enough to hit a century in Mosman Municipal Council’s centenary match on the ground to be named after him – Allan Border Oval.

Twenty years after he walked 100m across The Crescent from No 27 to play first grade on Mosman Oval as a lad from North Sydney Boys High, Border cracked 160 from 118 balls to lead Mosman Mayor’s XI to a one-wicket win over Greg Chappell’s XI. 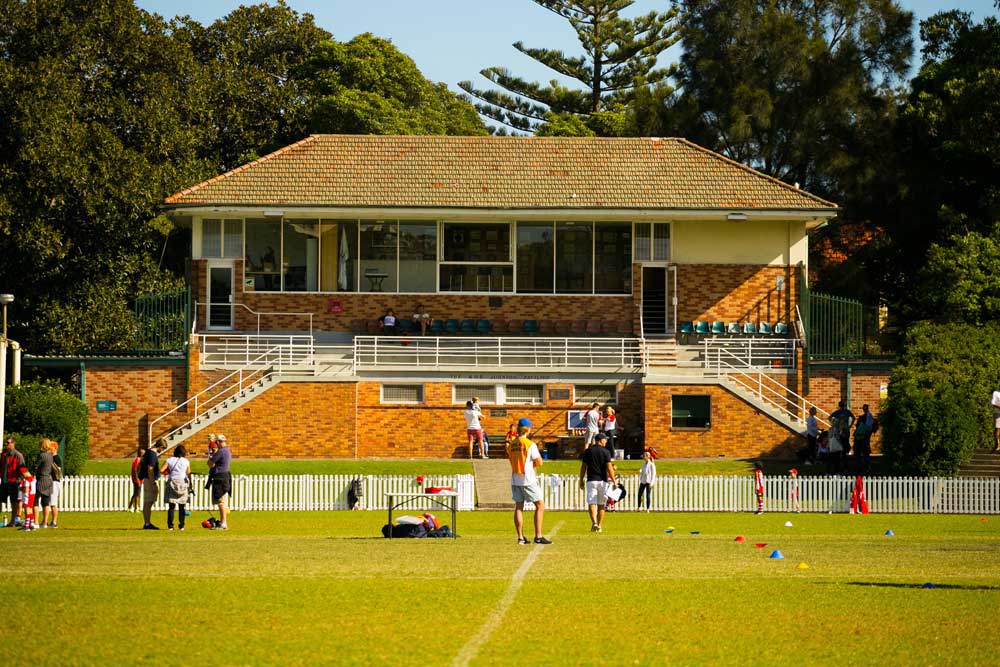 Allan Border Oval and the club house, prior to its demolition earlier this year.

Border brought up his half-century with a pull-driven six from national selector John Benaud, his century from 92 balls with a lovely boundary through extra cover, and in all he struck four sixes and 22 boundaries. 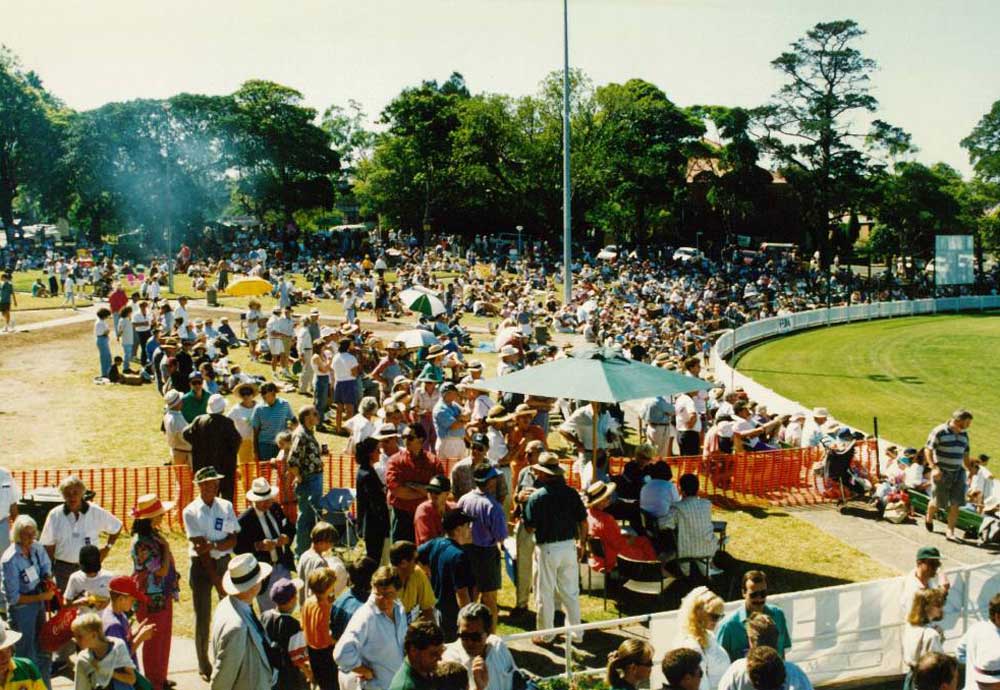 In front of a crowd of 6,000 and before yet another match-winning innings, Border said: “I always come back here, check the place out, drive around The Crescent and look at the oval.”

“I’ll always be a Mosman boy.”

“To have the oval named after you … you always think that happens to old-timers. Perhaps there’s a message there.” 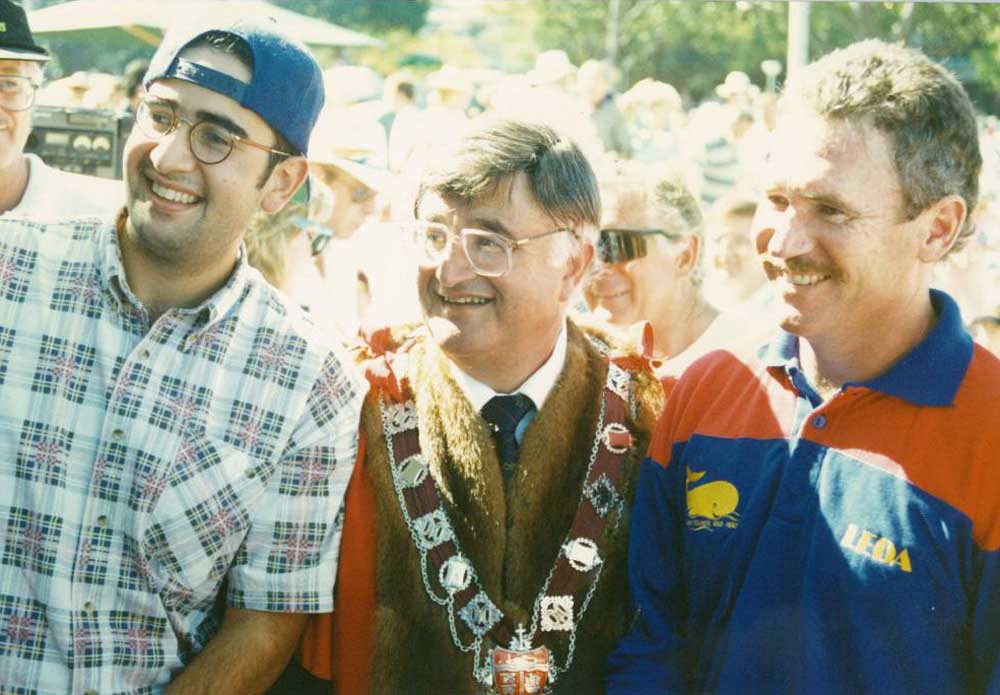 Approaching 38 in July, Border laughed and said: “It’s a huge honour, without question. This is really where it all started for me, so it is the ultimate honour.”

Greg Chappell’s team contained 10 Test players and former NSW all-rounder Hugh martin, who smashed his way to 59 after a fine innings by Trevor Chappell (72) and Doug Walters (64) for what appeared to be a winning score of 9-289 before the intervention of Border and his first Captain Barry Knight (50). 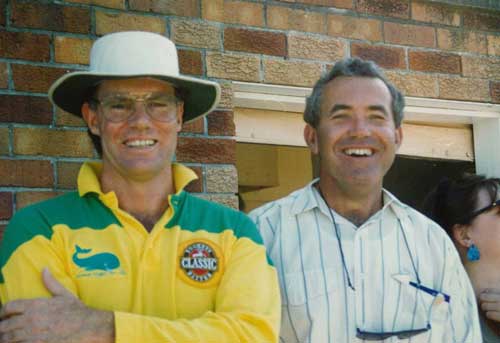 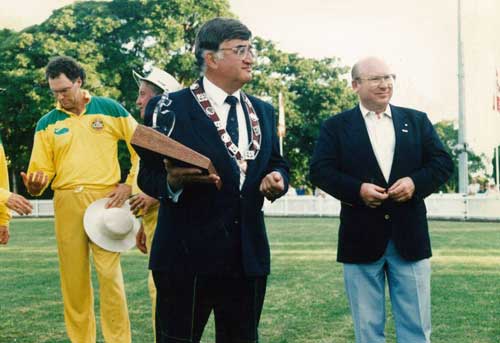 Walters, 47, astounded with his fielding dexterity on the fence, Grahame Corling, 51, retained his rhythmical Test run-upwith all his old ferocity for 35 and Chag Chappell, 44, made slips fielding a breeze. 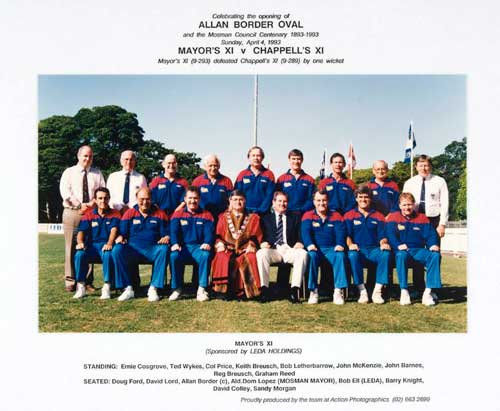 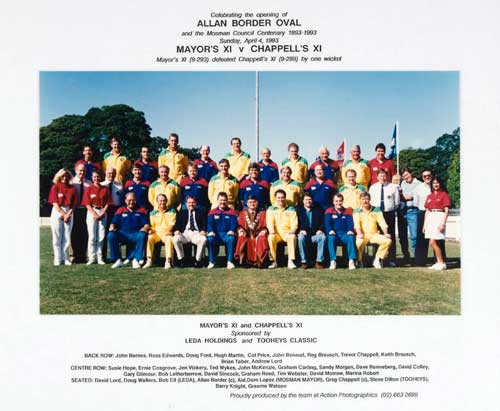 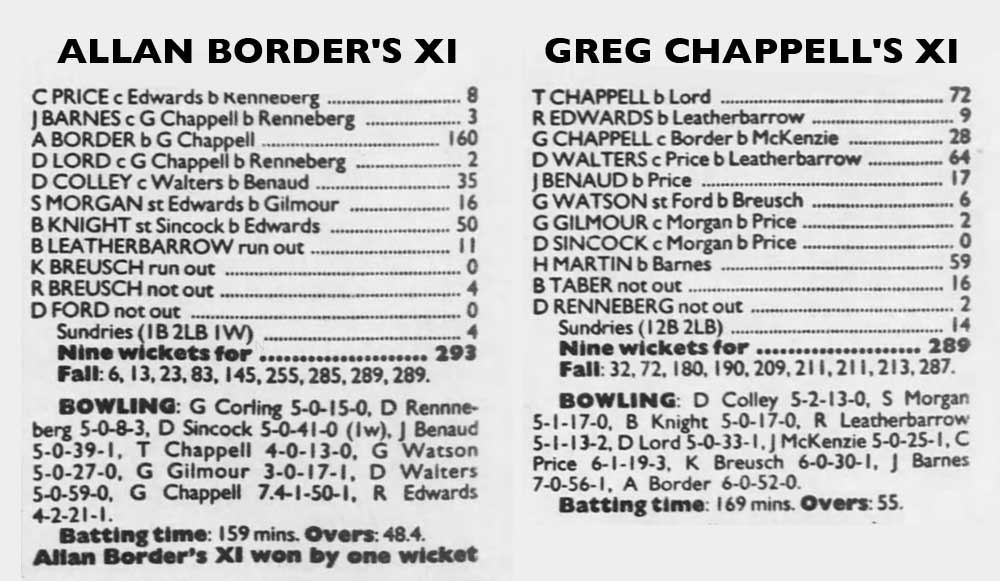