On her last day of the Royal Australian Tour in 1954, Sydney turned out to catch a final glimpse of Queen Elizabeth and the Duke of Edinburgh, before the couple departed our shores for New Zealand. At St Leonards Park in North Sydney, the largest gathering of school children – some 48,000 – waited for three hours in searing summer heat to see the glamorous young Monarch.

The Queen and the Duke of Edinburgh delighted more than 48,000 cheering, wildly excited school children in a 10-minute drive through St Leonards Park, North Sydney at midday yesterday.

As the Royal car entered a “Z” laneway in the park, the Queen and the Duke, who were seated, waved and smiled at the children, but those at the rear of the 10-deep crush could not see.

The Queen stopped waving and turned to the Duke as they passed the music shell, about 100 yards from the Miller St entrance. 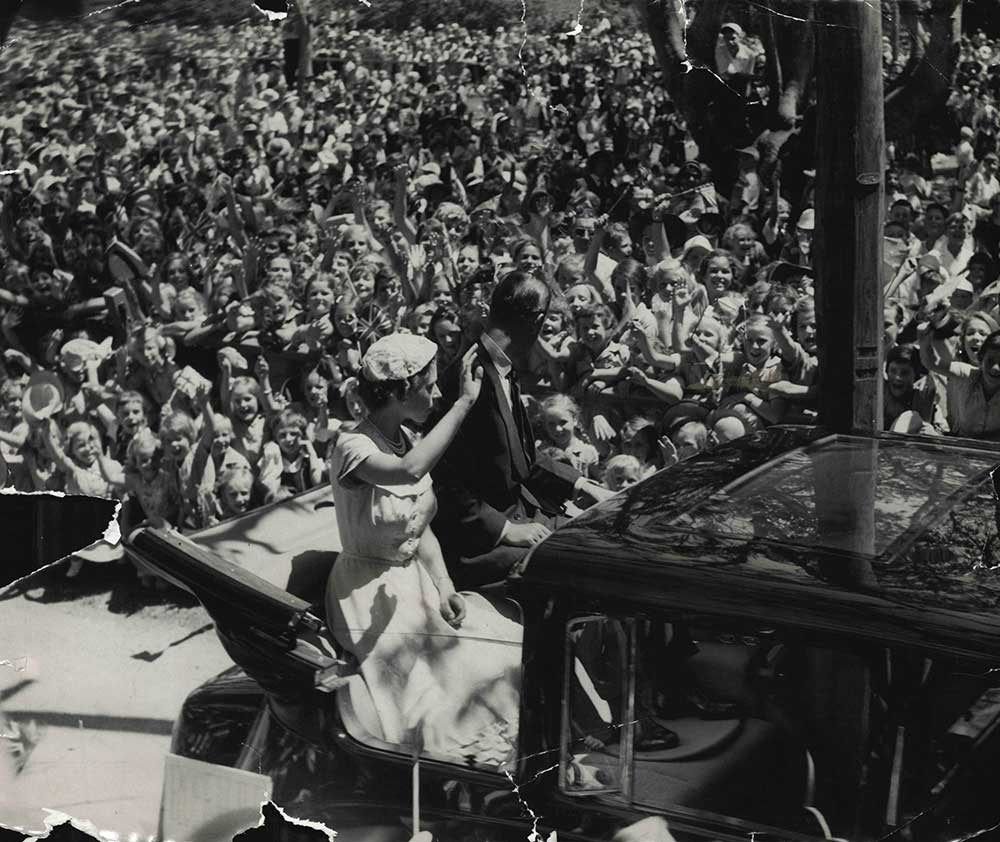 A few seconds later the Royal couple stood up, holding on to the edge of the car roof and pleasing the children immediately.

The children, from 131 schools in Sydney and suburbs began to pour into the park at 9am.

St John Ambulance officials treated more than 250 children and adults who collapsed under the blazing sun during their long wait. 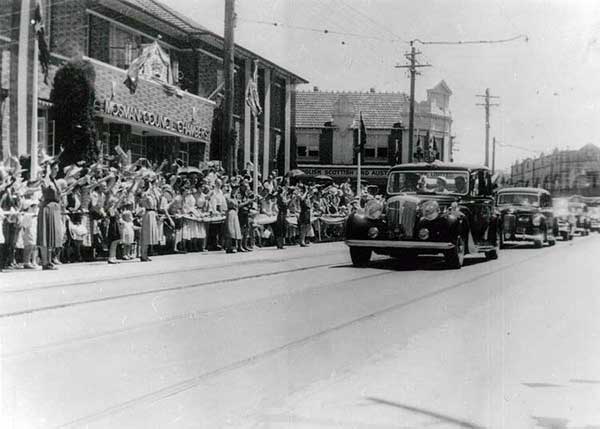 The Royal motorcade travelled from North Sydney to Mosman. 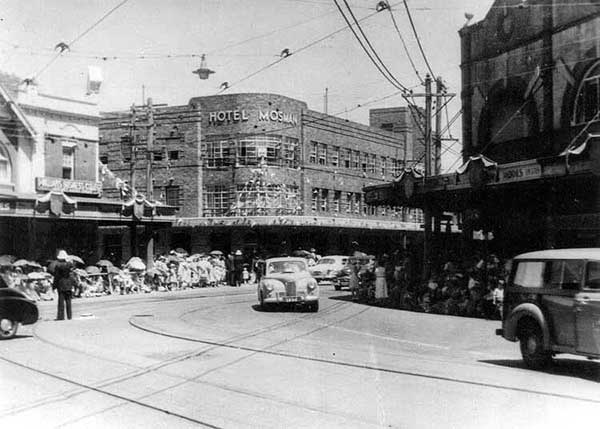 Thousands lined Military Rd in Mosman to see the Queen in 1954.

Near the Alfred St end of the laneway, 540 boys from The Kings School, conspicuous in slouch hats and red and grey uniforms, gave a military touch to the scene.

One the music shell stage stood the Mayor of North Sydney, Alderman W Brothers, members of the Municipal Council and their wives, and the Director-General of Education, Dr HS Wyndham.

Most of the children took drinks and lunches with them but two trucks selling ice cream and soft drinks did brisk business. 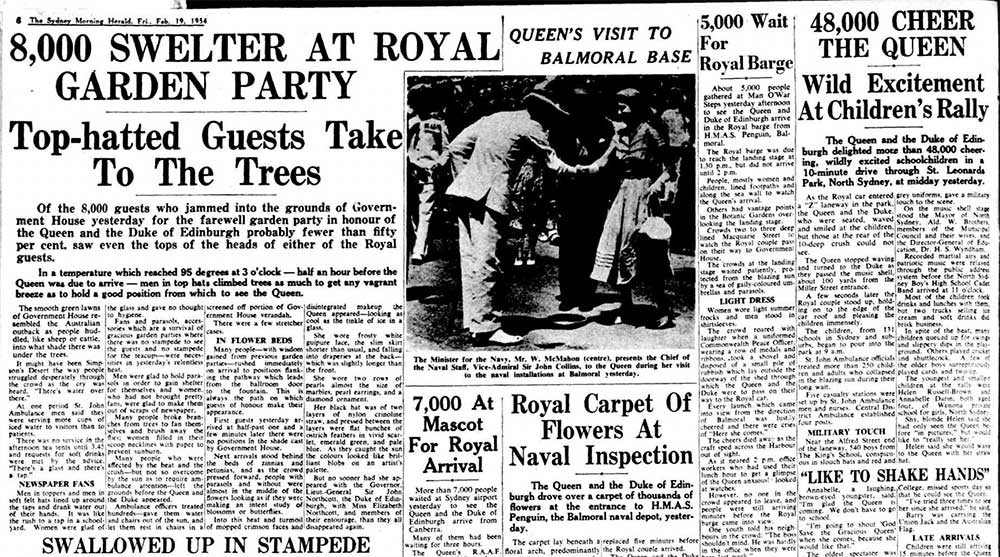 The Sydney Morning Herald reported on the Queen’s visit to North Sydney (far right) on 19 February, 1954.

In spite of the heat, many children queued up for swings and slippery dips in the playground. Others played cricket and shuttlecock. A few of the older boys surreptitiously played cards and two-up.

The youngest and smallest children at the rally were Helen Russell-Brown and Annabelle Darin, both aged four, of Wenona private school for girls in North Sydney.

Shy, blonde Helen said she had only seen the Queen before “in pictures” but would really like to see her.

Helen said she would wave to the Queen with her straw hat.

Annabelle, a laughing, brown-eyed youngster, said “I’m glad the Queen is coming. We don’t have to go to school.

“I’m going to shout ‘God Save the Gracious Queen’ when she comes because she would like that.” 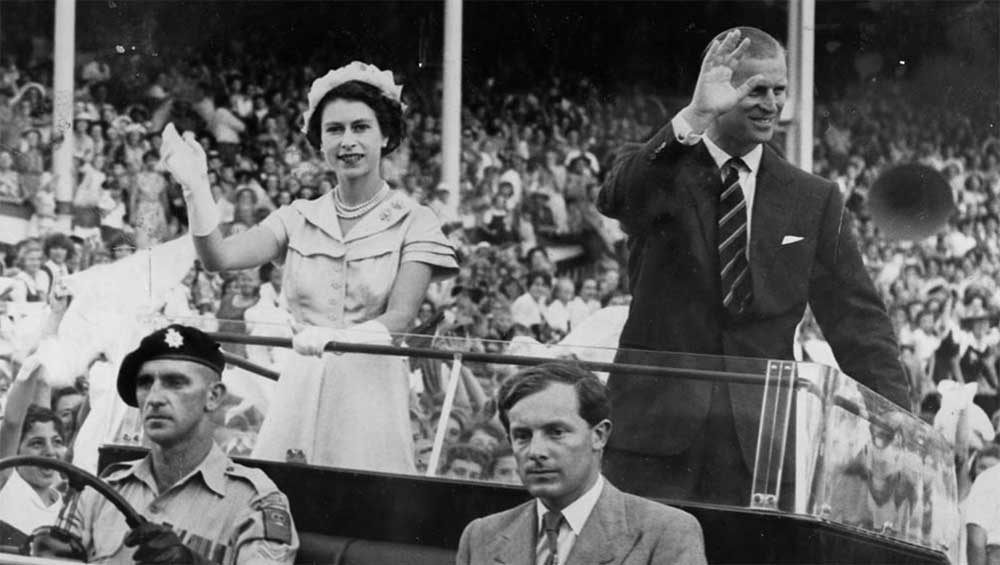 During their two-month tour in 1954, the royal couple took 33 flights, 207 car trips and several train journeys to visit every state capital (except Darwin) and 70 country towns.