Australian competitions aren’t limited to just sport and spelling bees. From yabby races to bed making, prawn peeling to whip cracking, we love nothing more than a good-humoured match-up. And one of the weirdest in history happened right here, in Mosman.

It was a Sunday morning in late April 1936 when two unassuming, middle-aged ladies slipped into modest one-piece swimsuits and entered the temperate Autumn water of Balmoral baths.

Strangers until that moment, the pair greeted each other warmly, shook hands and then paddled to the deep end of the picturesque pool.

Mrs Rebecca Palmer, from Glen Innes in northern NSW, and Manly grandmother Blanche Rose, were about to participate in the most bizarre aquatic clash ever contested.

They were vying for the title of “Australia’s Most Unsinkable Woman”. 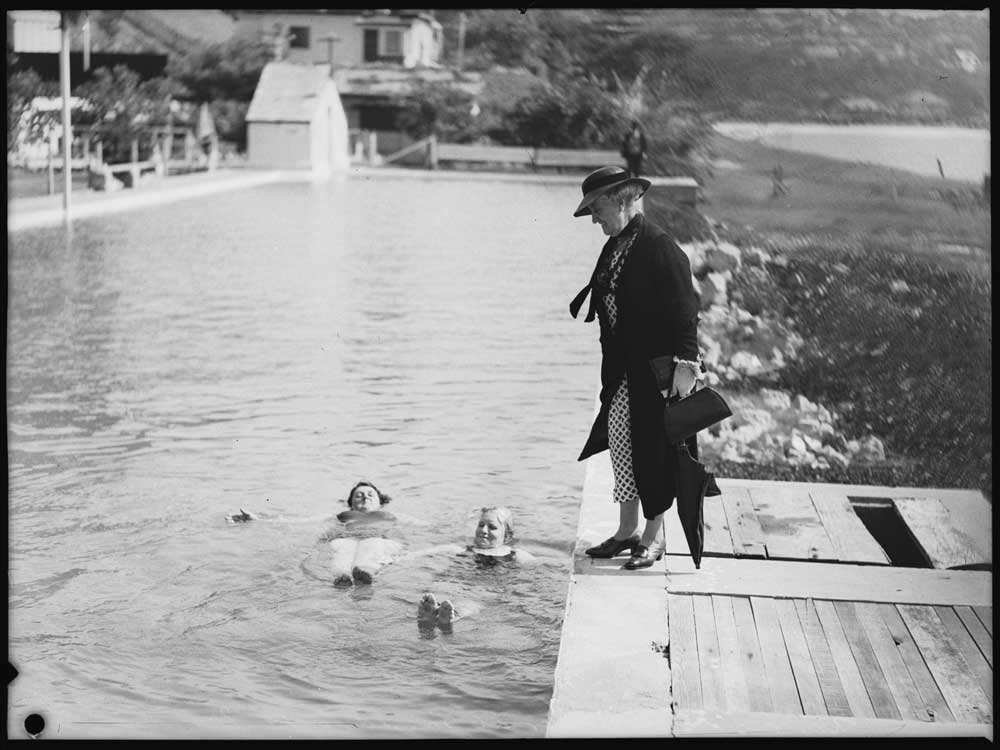 A female judge looks over the woman during the competition at Cavill’s Baths, Balmoral in 1936.

It all started when city newspapers picked up a small-town story about a “human cork” discovered in a northern NSW creek during the summer of 1935.

“The first inkling that Mrs Parker was different from other swimmers came when a newspaperman saw her floating in fresh water at Glen Innes, reading a book, and pointed out her peculiar floating abilities,” the Sydney Sun revealed.

“She was subsequently examined by a local doctor, who expressed complete mystification.” 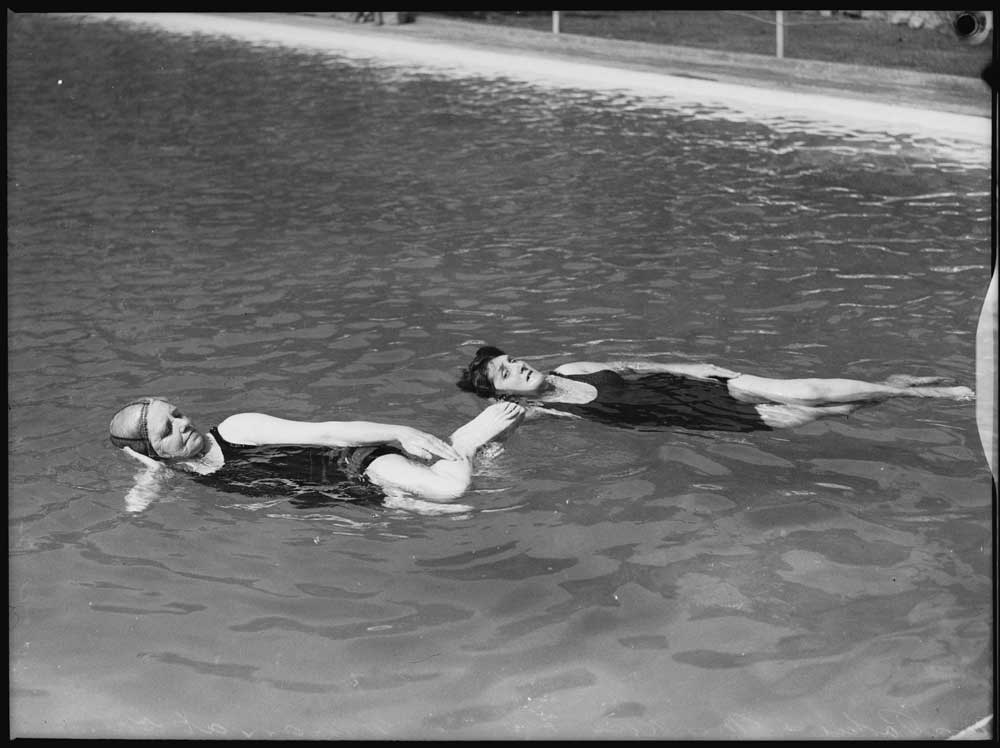 The fascinating tale immediately caught the attention of showbiz promoters, who promptly signed Mrs Parker, billing her as the world’s first “Lady Who Cannot Sink” at Sydney’s 1936 Royal Easter Show.

But Mrs Blanche Rose, a grandmother from Manly, was having none of that.

She, too, claimed a unique ability to stay on top of the water.

In a letter to The Sun, Mrs Rose advised the Editor of her talent to “float in any position, on my back, side or stomach” and issued a challenge to Mrs Parker. 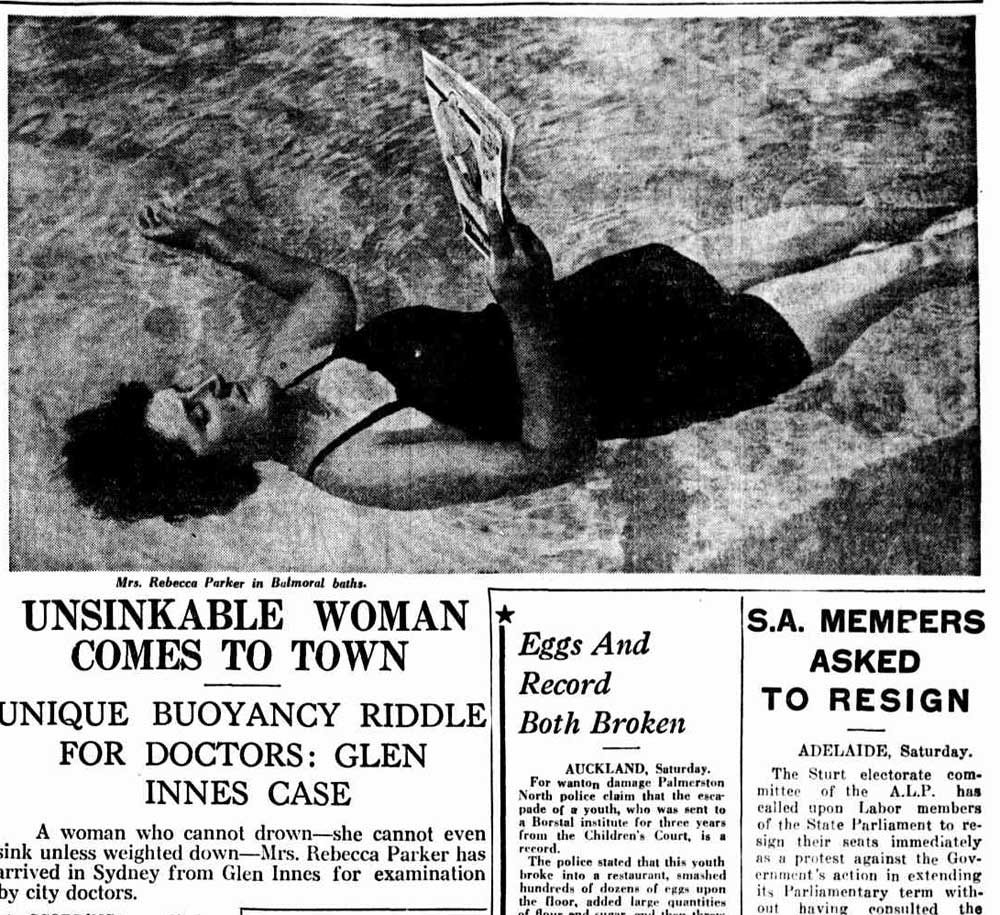 Arrangements were hastily arranged, and on Monday 13 April, Brisbane’s Courier Mail published details of the contest at Balmoral baths.

“After the publication of the story about Mrs Parker’s cork-like behaviour, Mrs Rose suggested it would be rather fun to meet in a friendly clash,” the story reads.

“Each woman claims to be unsinkable unless weighed down; each can recline on the surface on her side, head resting on crooked arms.

“Each can sip water and nibble food while lying on her back, read books and open umbrellas.

“Mrs Parker has a strong preference for still, fresh water, while Mrs Rose is not particular.”

For 30 minutes the woman suspended themselves in the temperate waters of Balmoral baths, posing in a number of strange positions.

At 10 am on Sunday 19 April 1936, Sydney media gathered to record one of the city’s most peculiar moments in its history. The women would be required to recline, sit and twist on the surface and conclude by taking morning tea while floating.

The first hitch came when Mrs Parker invited Mrs Rose to lie on her back, bending her knees to allow the legs from the knee down to sink beneath the surface.

They call me ‘The Cork’: Manly Grandmother Blanche Rose told reporters she had been able to stay buoyant since childhood.

Mrs Rose, the newspaper said, made valiant efforts to keep her feet tucked under but found her balance seconds before disqualification.

“They call me the cork,” Mrs Rose told bemused reporters as she bobbed around in windy conditions, to which Mrs Parker replied, “and they say that I’m unsinkable.”

Ten minutes in, Mrs Rose developed a cramp before taking the lead around 10:15 am.

“She sat down, or up, on the water, her knees tucked under her chin and arms clasped around her legs,” the Sydney Sun reported, “Mrs Rose sat about a foot beneath the surface in this position.”

Mrs Rebecca Palmer, a resident from Glen Innes in northern NSW, was quickly signed by showbiz promoters and appeared at the Sydney Royal Easter Show in 1936.

Dubbed the “freak floaters”, the ladies were then required to float in a seated position while touching their feet.

“Mrs Rose sat still and grasped her toes. By this time, Mrs Parker’s legs had floated away again, and she needed to be hauled back into place,” the story reads.

The last challenge of taking tea while suspended in water would decide the winner with the scoreboard even.

“They swam to the other end of the pool, where an iron tea table had been set for two,” the story tells us, “Then they manoeuvred into position to grasp the edge of the table.

“The trouble is,” said Mrs Rose as she held her cup, “that I float away.” 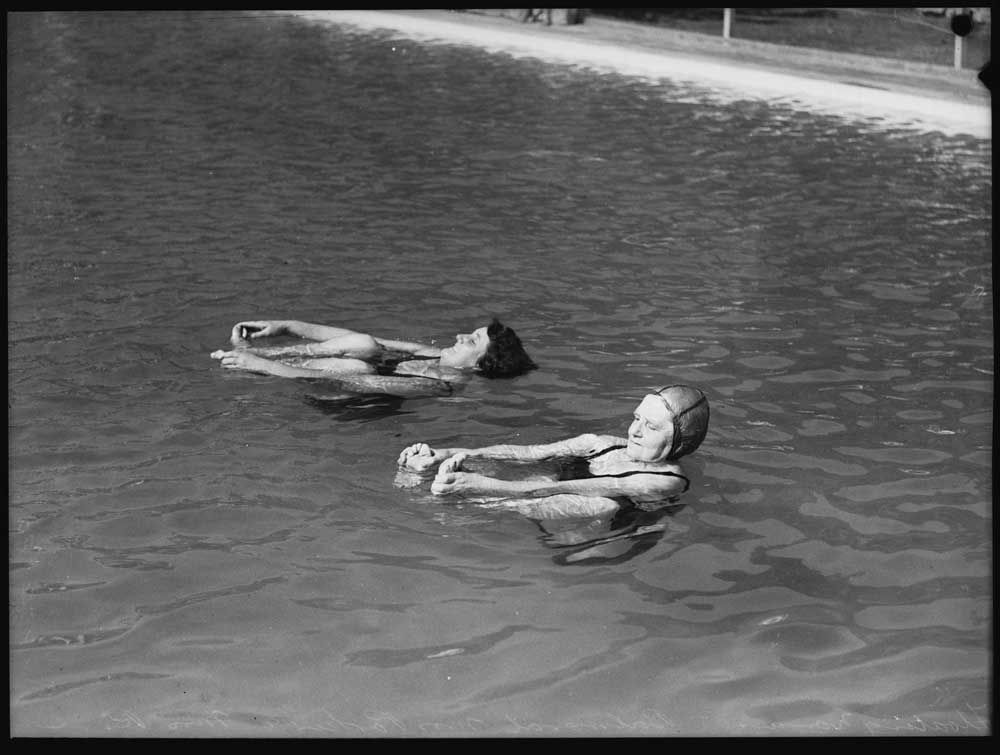 “Australia’s Most Unsinkable Woman” contest made headlines around the world.

After a tight contest, The Sydney Sun awarded Mrs Parker with the title of “Australia’s Most Unsinkable Woman” at 10:30 am.

“Honours were almost even, Mrs parker winning with her legs, which refused to stay underwater. Mrs Rose, an active swimmer with several grandchildren, said