TRENDING NOW >
Local outrage: Fifty-year-old ornamental palm tree to be destroyed for new Milsons Point cycleway ramp.
Exclusive: Twilight at Taronga returns in 2023 with James Morrison’s “A-Z of Jazz”.
Ryan Gosling to shut down Sydney Harbour Bridge while filming “The Fall Guy” this weekend.
Lower north shore residents reminded Lifeline services available during the Christmas break.
Special Report: School holiday activities on the lower north shore for kids of all ages.
Home » After slaughtering his wife and child, a Mosman maniac turned the gun on himself.
Previous Next

After slaughtering his wife and child, a Mosman maniac turned the gun on himself.

But on Monday 18 July 1932, the brilliant and popular 13-year-old was missing from morning roll call at North Sydney Girls High.

As Alma’s classmates questioned why their friend was not at her desk, the same enquiries were being made across town at Carmichael and Co, a leading Paper Merchant in Sydney’s CBD. 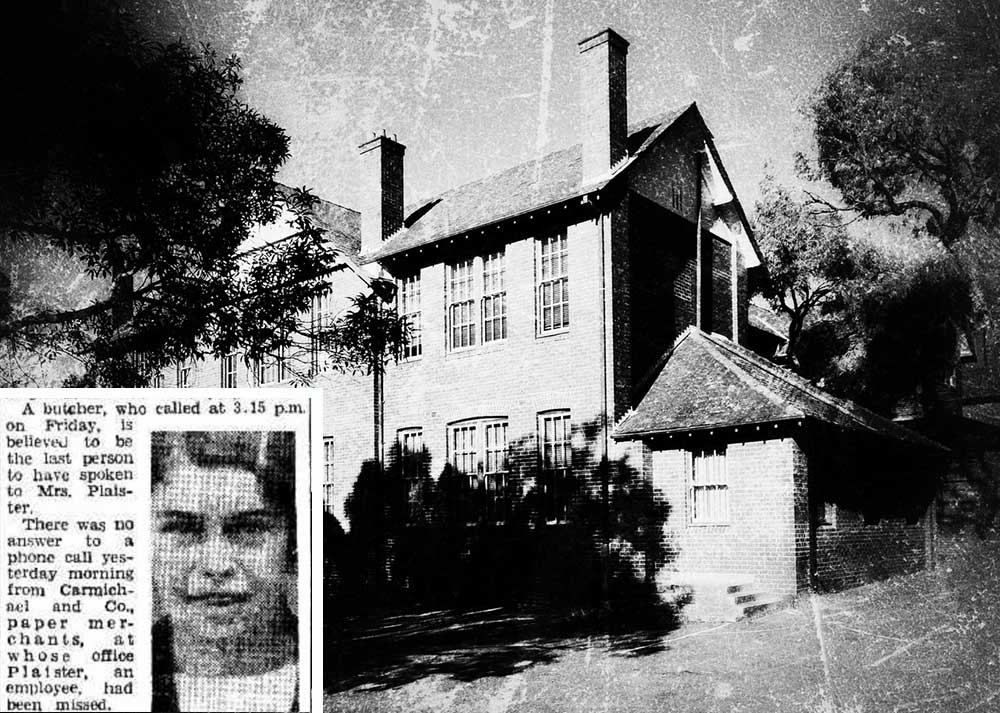 Senior executive Harry Plaister, a loyal employee of 18 years, had not yet arrived at the company’s head office, located in Dalton House on Pitt St.

Meanwhile, over on Spencer Rd, Eliza Crawshaw was growing increasingly worried, having not heard from her daughter, Harry’s wife, for three days.

At 9:30 am, Mrs Crawshaw made the short journey on foot, up Cowles and past Cabramatta Rd, before turning left into Glover St.

When Mrs Crawshaw knocked on the front door, there was no answer. 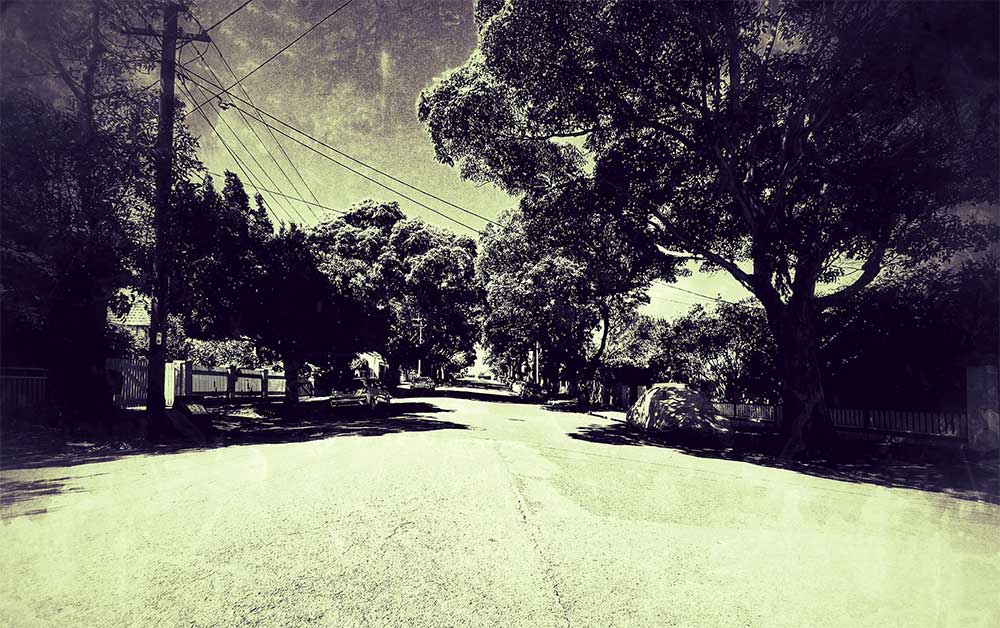 Her curiosity took her to the back steps of the Plaister’s lovingly maintained home, where a weekend delivery of a new Gramophone, groceries and meat remained untouched.

Gripping a windowsill to peer inside, Mrs Crawshaw’s desperate screams brought the street to a standstill. 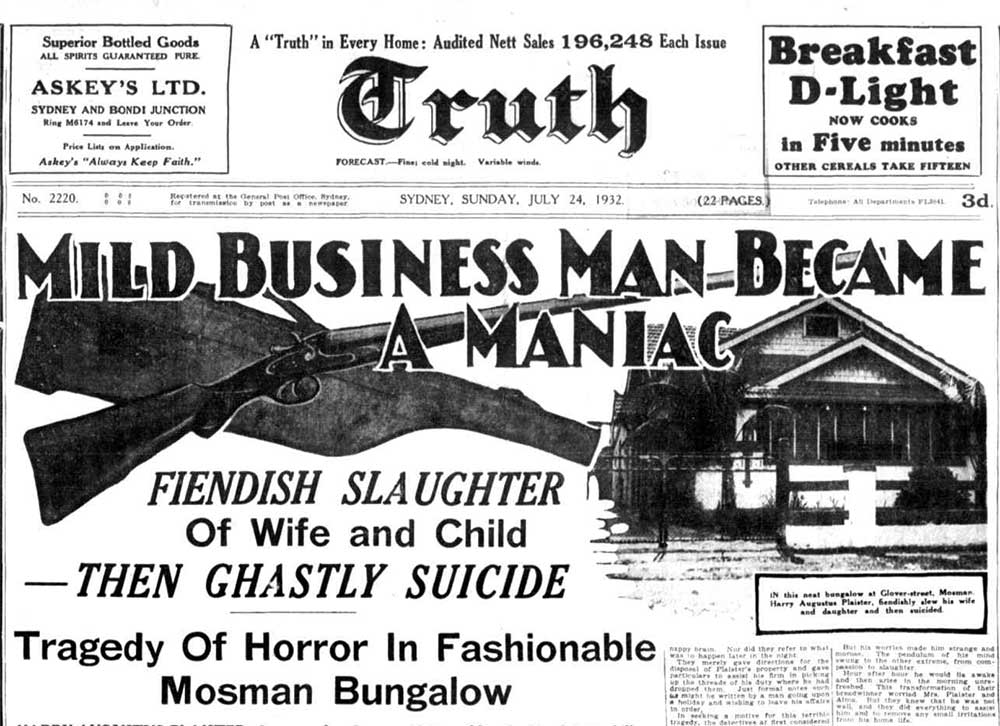 The grotesque scene brought hardened Mosman Detectives Eaton and Regan to their knees.

“I looked through the bedroom window in Glover St, Mosman and saw a young girl lying on a bed with a gaping wound near her mouth,” he later told City Coroner Edwin May.

Climbing through the window, Detective Regan then made his way to the kitchen, where he found Mrs Plaister in a pool of blood.

In the back room was the body of Mr Plaister, lying on the floor with a double-barrelled shotgun between his knees.

The top of his head was blown off. 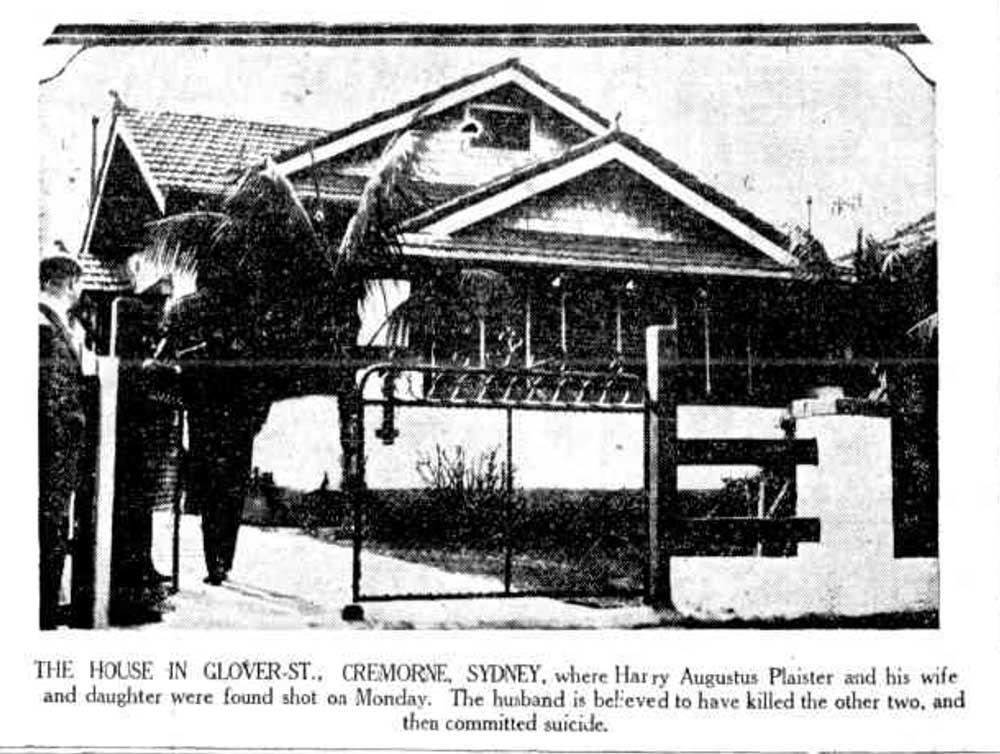 The Plaister’s house on Glover St in Mosman. 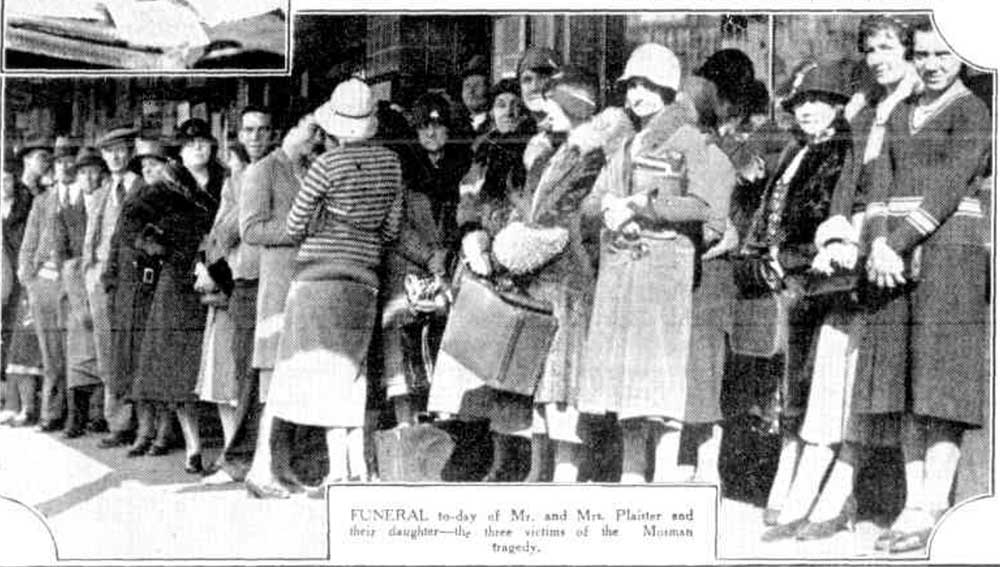 A huge crowd of shocked locals lined the streets to pay their respects after the vile tragedy.

Harry Augustus Plaister, the mild mannered and doting father who always said it would make him faint to kill a backyard chicken, had slaughtered his adoring wife and pretty daughter on the night of Friday 15 July 1932.

Little Alma, the dux of her first form class, was the first to die just after 9pm.

Holding the muzzle of the gun close to her mouth, Plaister pulled the trigger and the shot tore away a portion of the little girls skull. 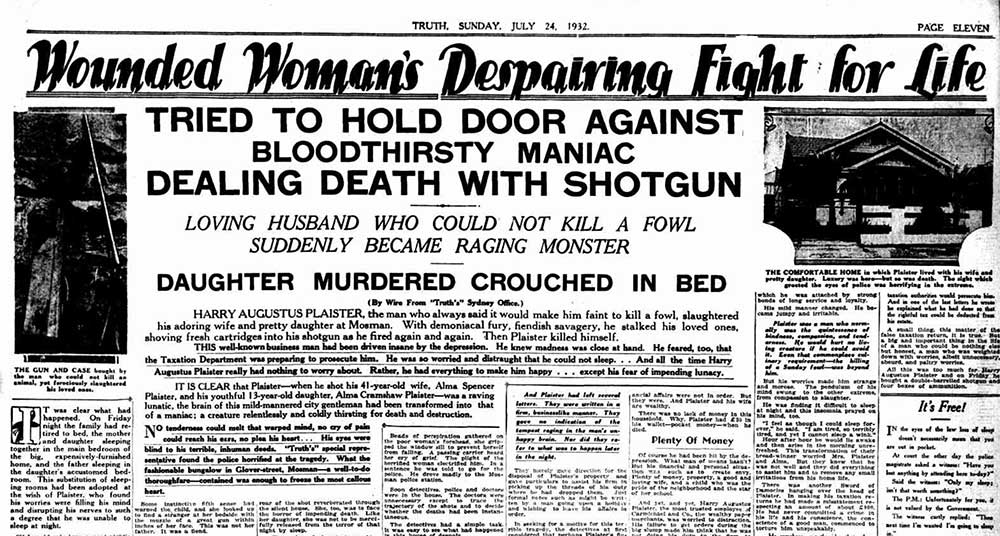 “Seeing that she was going to be shot, she had pulled the bedclothes over her face,” the Government Medical Officer told Coroner May.

“Whether Mrs Plaister was lying down in another room or whether she was moving about the house is unclear. It is evident however, that the sound alarmed her and coming from the rear of the home, met her husband leaving his dead daughter’s room.”

The deranged assassin then went for his wife.

As she ran down the hall, Plaister fired and missed. Shrapnel peppered the wall.

The madman fired a second time, just as Alma Plaister raised her arm in a gesture of defence. Half of her right hand was blown away. 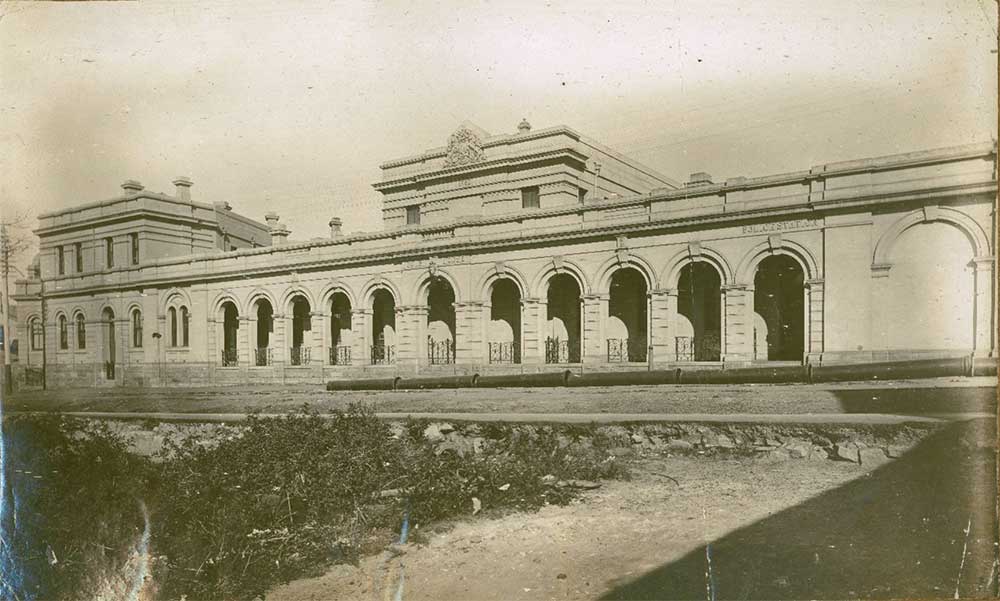 The terrified woman then barricaded herself behind the kitchen door to keep the maniac at bay.

When they reconstructed the tragedy, Police said the woman had “exerted all her strength” to prevent her murderer from opening the door.

“Slowly but surely the pressure applied by the husband became stronger until finally she staggered back and again turned to flee,” the Coroner was told.

“For a brief moment, she felt the muzzle of the weapon in the small of her back, then she fell back bleeding to death from a gaping wound.

“So close had the shot been fired that the charge tore right through her body.” 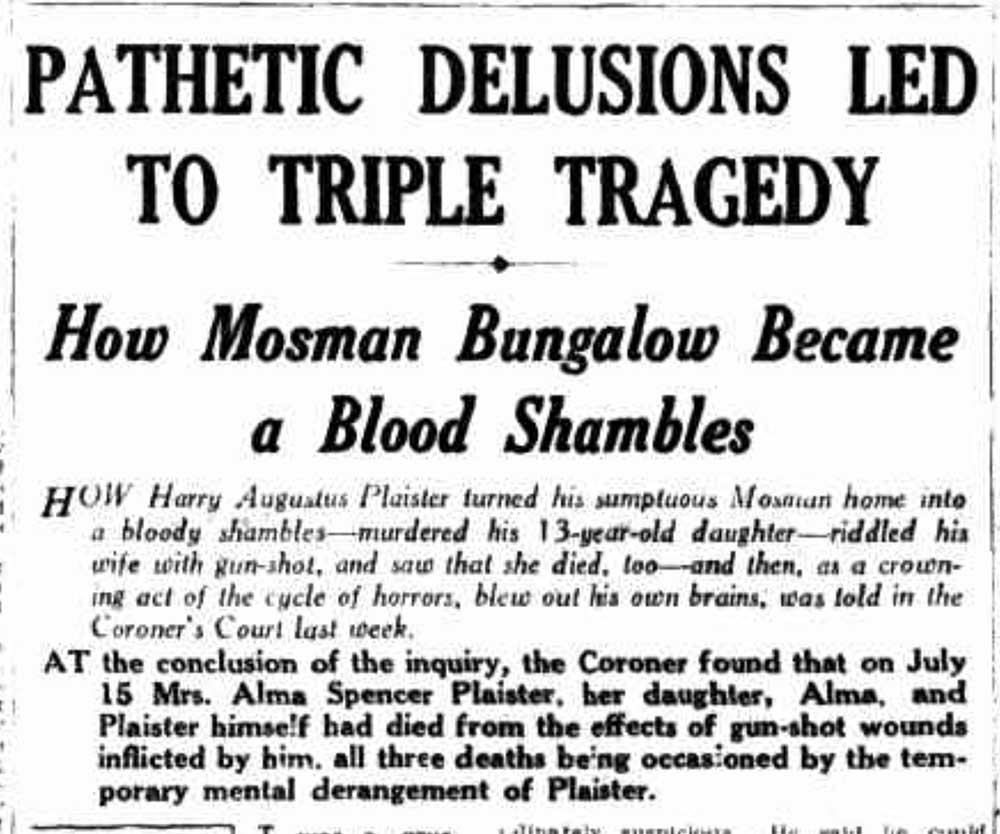 Alma Plaister was found on the floor in a crouching position, her head between her knees.

Having wiped out his family, there was nothing more for Harry Augustus Plaister to do. He retired to his bedroom, placed the gun between his legs and fired the last shot with his right thumb.

*Footnote: On a table in the sitting room, Detectives found three letters, neatly written in ink. In one, addressed to Plaister’s mother, he said goodbye. Another letter was addressed to the Taxation Department and a third dealt with business papers. The family had no financial difficulties, owned their home and left more than £6000 in savings.